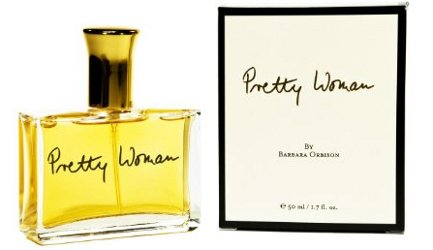 Wait! Don’t click away! Had I not smelled Pretty Woman by Barbara Orbison, I, too, would have been tempted to scroll past this review. There are enough celebrity fragrances on the market to carpet Mars, and, as far as I’m concerned, another planet is exactly where most of them belong. A fragrance named after the dead wife of a dead rock legend (Roy Orbison) doesn’t inspire cheers of delight.

And then I smelled Pretty Woman. It’s not fashionable or pandering, but neither is it overly clever or challenging. Instead, it’s a warm, heady 1930s-style perfume with rich sillage and a long simmer on skin. Pretty Woman is kind of a lame name for it, really. It smells more like Sultry Broad.

Pretty Woman’s website describes the fragrance as “a complex blend of hundreds of individual floral and spicy notes,” and specifically mentions bergamot, stargazer lily, red rose, carnation, fresh amber, patchouli, vanilla, atlas cedar, and sacred incense. What I smell is a flash of bergamot and raw cedar quickly cushioned by the unmistakable combination of incense, patchouli and amber. The fragrance is spicy, too, like it was sprinkled with clove, nutmeg, and even a dash of cinnamon.

Rose adds a wine-like touch to the composition, but I can’t pick out lily. What I do smell is a vigorous dose of orange blossom, as if the perfumer were determined to balance the headiness of Pretty Woman’s base notes. The orange blossom adds a clean touch that fades after an hour or so, but the spices do more to make Pretty Woman’s sable-weight warmth sparkle.

In short, Pretty Woman is a mature, warm, spicy fragrance rich with incense. It hints at Estée Lauder Youth Dew without being dowdy, but it owes the most to Jean Carles’s amazing Tabu. If you get Pretty Woman on your cardigan, you can count on the fragrance’s gentle waft of spicy patchouli and ambered incense until you wash your sweater next.

I asked Emily Orbison what her grandmother was like. “Comfy,” she said in her charming Nashville accent. All right, I can see Pretty Woman being comfy, although that’s not the first word I think of. “She liked to wear velour sweatpants and matching tops.” Hmm. Velour tracksuits don’t really say Pretty Woman to me, either. “And she loved leopard print. She always wore leopard.” Ding ding ding!

1. Pretty Woman's concentrate is mixed by Sarah Horowitz Parfums, and it's diluted and bottled by Cosmetix West.