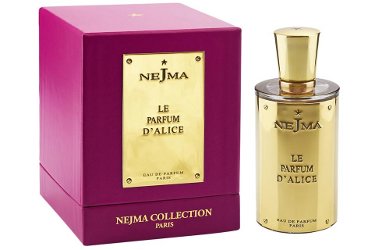 When Alice Lavenat, a young perfumer working for Jean Niel in Grasse, entered the 2014 French Perfumers Young Perfumer of the Year Competition she had no idea where it was going to lead……

The brief was deceptively simple: create a fragrance with blackcurrant buds at its heart. More than 100 young perfumers from 20 countries around the world entered the competition but the judges’ decision was unanimous and at the World Perfumery Congress in Deauville, Alice was awarded this prestigious prize.

One of Jean Nuiel’s clients, Marie Lise Bischoff creator of the Nejma brand, fell in love with Alice’s creation and decided that she wanted to produce it as a stand-alone scent under the Nejma banner. Marie Lise was determined to bring this talented young perfumer to the fore and the fragrance not only carries Alice’s name but she also has her signature on the box.

Alice’s winning creation opens on refreshing notes of rhubarb, blackcurrant, pink grapefruit and pink pepper. At its heart lies a rich bouquet of peony, subtly blended with orange blossom absolute and Turkish rose absolute completed by the delicate fruity notes of blackcurrant absolute. The fragrance is enriched by a base of Haitian Vetiver, labdanum and the woody notes of cognac barrels, a nod to Alice’s roots.