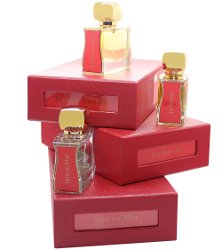 Sans un mot ~ "And then... Do you know the expression “an angel passing”? It’s her perfume. I don’t remember her face, but she was in a hurry. And she stunned everyone in the lobby just by wearing THAT perfume. Suddenly, the whole lobby is quiet and I’m amused to see everyone looking around in search of the origin of that fragrance. […] I have no idea of which perfume that was. But the image stays with me, it haunts me and I dream of a fragrance with such an impact. That’s how I begin writing the story of what will become my new great floral powdery perfume à la française." With pink pepper, tangerine, rose, ylang-ylang, cassis, vanilla, violet, iris, powdery musk, white musk and soft woods.

Jus Interdit ~ "Welcome to the lobby of a luxury hotel. This could be in Paris, Dubai, London or New York, it doesn’t matter. Do not be distracted by the ice blue eyes of a sumptuous Slavic woman crossing the burning ones of an exuberant Latina. Do not be overwhelmed by the unique opulence of fragrances worn by middle-eastern ladies. Forget the smell of traditional Oriental Bakkhours of the princes who accompany them. Close your eyes for a while." With bergamot, solar flower, patchouli, cypriol, african stone, oud wood, Virginia cedar, Atlas cedar, iris, benzoin and amber.

Sombres Dessins ~ "Beyond that note which has become a fantasy (you can no longer use Mysore sandalwood; the forests are protected after having been overexploited...[...] By itself, it's almost supernatural, it’s a potion that embraces you, it’s mesmerizing, it’s the Holy Grail of raw materials when we wish to express sensuality. Like most Jovoy’s perfumes, the name "Sombres Dessins" revolves around a pun. We could have called it “Sombre desseins”, "Dark Intentions". But he who wears it doesn’t have those intentions. He is not Machiavellian, he doesn’t not need to be. He has a natural understanding of our codes, standards and of how things work. On his skin, his perfume is a trap. It is a hot and sweet cocoon full of intoxicating spices and hidden flowers. It is the Siren’s song from which no one can escape." With bergamot, pink pepper, rose, osmanthus, patchouli, saffron, sandalwood album, labdanum, frankincense and rum.