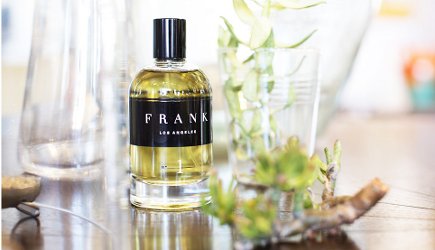 Frank Los Angeles has launched Frank No. 1, a new fragrance for men.*

The Dark Side of Fougère

Masculine from top to base. Unapologetically. Uncompromisingly.

The project started out as a personal exploration of amber notes through clary sage. It ended up delving into the dark side of fougère.

A quintessentially masculine fragrance family, fougère is built around bergamot, lavender, geranium and moss. N°1 upholds the classic structure, but gives it a twist by crossing it with another iconic genre for gents: tobacco-leather.

At first, N°1 plays it cool with a twist of lime and a sprinkling of fresh spices, greened up with tomato and violet leaf. Then the clary sage core kicks in, its amber and tobacco facets boosted by maté. In turn, maté introduces a leather note, enhanced with Atlas cedar, iris and violet. Licorice adds a dark, mouth-burning chewiness. Amber and costus give a hint of the beast lurking in the moss and leather undergrowth. But that sexy beast smells tempting enough to eat…

* The Frank No. 1 fragrance released in 2004 has been discontinued.