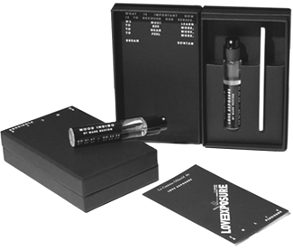 Folie à Plusieurs has launched their second fragrance,* Love Exposure. Like their first, Mood Indigo, Love Exposure was inspired by an art film and was used to scent the theater when the film was shown in Berlin at Soho House.

For Love Exposure, perfumer Mark Buxton was inspired by Sion Sono's film by the same name:

"I was inspired by the films mixture of love, lust, violence, sex and religion. A story told with a certain kind of humor and tension that builds up and leads you to an unforeseeable ending. — love. A delicate floral scent, somehow innocent, but heady and strong at the same time. — lust. Clean, but kinky animal notes which run through the scent like a red thread; costus, indol and cumin and ambergris. — violence. The surprising bloody note from the bucchu oil, bay and metallic notes. — sex. A smell of hot wet skin communicated through a mixture of musk, vanilla and sandalwood. And — religion. Translated through my all time favorite incense with light sharp woody notes and a touch of amber. ” - Mark Buxton

* Update: the fragrances are meant for ambient or personal wear.