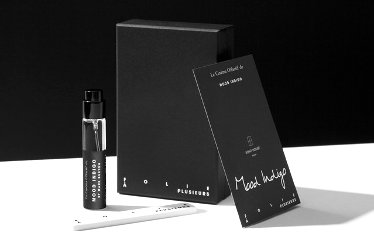 Folie à Plusieurs is the new fragrance brand of Kaya Sorhaindo, one of the original founders of the Six Scents Fragrance Initiative. The brand's first perfume release will be this fall, but in the meantime the brand is collaborating on Le Cinéma Olfactif, pairing art house films with fragrances* developed by perfumer Mark Buxton. The films are being shown in Berlin at Soho House.

Mood Indigo was developed for the film of the same name by Michel Gondry. The notes feature red pepper, chamomile, lily, freesia, woods and incense.

Folie à Plusieurs Mood Indigo will be available in 10 ml Eau de Parfum packaged with a diffuser strip. It will be in limited distribution; in the US, look for it at Luckyscent, in France at Colette and Nose.

* Update: the fragrances are meant for ambient or personal wear.