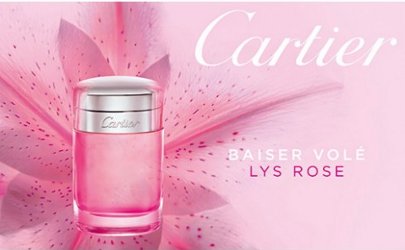 One of the pleasures of summer is enjoying a glass of rosé wine in the backyard with a friend. Rosé varies, for sure, but in general it’s a crowd pleaser and doesn’t take itself too seriously. It’s a touch fruitier than many white wines and makes friends with whatever summer food you’re eating, from grilled salmon to tomato salads. And, hey, it’s pink. I can’t help but think perfumer Mathilde Laurent was sipping a chilled Provençal rosé when she created the Cartier Baiser Volé flanker, Baiser Volé Lys Rose. It’s that kind of fragrance: easy, versatile, fun, and perhaps, ultimately, forgettable.

Cartier’s press release describes Baiser Volé Lys Rose (I’ll just call it “Lys Rose” from here on out) as a fragrance in which “the crystallized petals of a blooming pink lily are combined with subtle touches of raspberry to enhance the powdery and delicate note of Baiser Volé.” (To be clear, the fragrance isn’t about roses. In this case, “rose” is French for “pink” and Lys Rose is “pink lily.”)

Lys Rose gives off a lot of pepper, woody musk, and dry raspberry at first sniff. It almost reminds me of the chocolate-y whiff you get when you lift the lid from a box of Whitman Samplers. The raspberry is definitely noticeable, but it isn’t jammy in the least, and no one would mistake Lys Rose for a Jolly Rancher candy. Despite the raspberry and Whitman Sampler comparison, I wouldn’t call Lys Rose particularly sweet, either.

Pepper is a major player throughout the fragrance’s short life. The pepper does a good job of cutting the white musk so that it smells less like shampoo. Also, I smell a lot more woody musk in Lys Rose than in Baiser Volé. It isn’t enough to send me for the Advil, but I know it’s there. In short, Lys Rose is a quiet, dry raspberry and pepper scent with a bit of jasmine/lily and a clean, musky shell. Despite what the press release says, I wouldn't call it "powdery" at all.

The first few times I wore Lys Rose, I couldn’t see the link between it and Baiser Volé. It wasn’t until I sprayed Baiser Volé next to Lys Rose that I smelled the buzzing jasmine and hint of green and truffled earth they share. Another reason I had a hard time smelling Baiser Volé in its pink flanker is that, on my skin at least, Lys Rose has close sillage and not a lot of persistence. Even when I dumped the rest of the sample vial on my arm, I barely squeezed an hour and a half of life from it, and I didn’t get much dimension. But maybe that’s what a summer flanker is all about.

Most of the time, we don’t drink rosé for the memory of what an awesome wine it was, but rather for the memories of the evenings we spent when we drank it — for the friends, the fireflies, the laughter. You might want to think of Lys Rose that way, too. To me, it’s no masterpiece, but it stands in for something relaxing and easy. I’m okay with that.