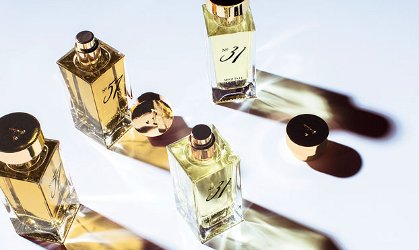 J. Crew will launch two fragrances, No. 31 and No. 57, developed in collaboration with niche brand Arquiste. The fragrances were developed by perfumers Rodrigo Flores-Roux and Yann Vasnier, who were asked to...

...conjure up the Jan. 5, 1943, opening of “Exhibition by 31 Women,” the first all-female modern art show in the U.S., curated by Peggy Guggenheim and displayed at her Art of This Century Gallery on East 57th Street in New York.

No. 31 ~ "attempts to capture the excitement of the crowd and essence of the cocktails", with red vermouth, eau-de-vie accord, rose and damson plum.

No. 57 ~ "meant to reflect the warmth, wood and amber glow in Guggenheim’s gallery", with aged whiskey, cinnamon, labdanum and vanilla.