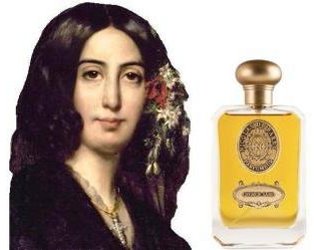 Until recently, perfumer Nicolas de Barry was unknown to me. After sampling his current collection of "historial perfumes" named after famous figures from the past, I've chosen three fragrances with distinctive characters to review today.

I've already found one perfume I enjoy that's inspired by George Sand; here's another. L'Eau de George Sand starts with a patchouli-amber accord (the patchouli is mid-strength and smells genuine). L'Eau de George Sand's sillage is interesting; this fragrance smells as if it's being worn by another person standing near me — a person who has been bustling about in heavy winter clothes that have been worn and re-worn, and have an accumulation of talc-y rose and sandalwood aromas clinging to them (along with the aromas of the person). L'Eau de George Sand's musk (mercifully "non-white") and oud (faint but natural smelling) combine with citrus peel (and perhaps a smidgen of immortelle) to create a smooth, engaging, finish. This is my favorite Nicolas de Barry fragrance so far (I still have a few to try).

Marguerite de Valois, queen of France and Navarre, was the daughter of Catherine de Médicis (herself a lover of perfumes, among other, less savory, things). History, and Nicolas de Barry, may deem Marguerite "outrageous” due to her energetic pursuit of sex, but her love of strong, musk-y scents may have also augmented her carnal reputation and outraged those within smelling distance. Chances are good Marguerite would like L'Eau de la reine Margot.

The perfume opens with sweet florals mixing with pungent musk. My first impression of L'Eau de la reine Margot hasn't changed much over three days of wear: when first sprayed on, it gives an impression that an animal has gotten into my house and defecated in my vicinity. (I'd certainly let L'Eau de la reine Margot dry on skin for at least five minutes before venturing into the company of others...applying it in public might be "provocative"). On one day of wear, the (civet-like) musk predominated; and this musk (be it natural or synthetic) smells of merde, nestled within a lavish bouquet of indolic jasmine blossoms. 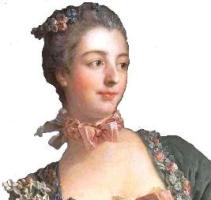 Jeanne-Antoinette Poisson, marquise de Pompadour, was ambitious, and powerful, during her 20-year stint as Louis XV's "official" mistress. Not just a beauty, she was an educated person (with friends like Voltaire). The marquise was a patron of the arts — with exceptional taste and the money to see huge projects through to completion (projects like the building of the École Militaire and the Place de la Concorde in Paris, the Petit Trianon Palace at Versailles, a new wing on the palace of Fontainebleau, and the Château de Bellevue).1 Like other members of the Versailles court elite, Madame de Pompadour indulged in scented toiletries to enhance her beauty and to counteract the stench of the palace and its public corridors (where urine, feces and all manner of "unwashed" folk could be found in large quantity).

Orders can be placed at Nicolas de Barry Maison de Haute Parfumerie (where you can also see a list of shops in Europe selling the perfumes). As far as I know, this line is currently not sold in the U.S.