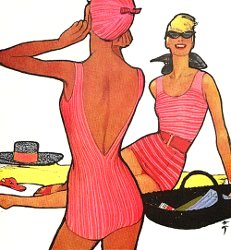 For many years I have been in love by the famous Ambre Solaire oil. I always wanted to create a fragrance from which I can use this wonderful smell, synonym of sunny beaches. A fragrance with a powerful sensuality that smells on your skin like a hot summer day was my main obsession! — Patricia de Nicolaï1

I've never smelled Ambre Solaire, the suntan oil originally released by L'Oreal in 1935 and now sold under their Garnier brand name. But most anyone will recognize Musc Monoï, the latest from French niche line Parfums de Nicolaï, as the smell of a summer vacation at the beach.

Musc Monoï isn't meant to be a replica of Ambre Solaire,2 and don't let the 'monoï' in the name fool you into expecting gardenia. Musc Monoï could be ylang petals soaked in coconut oil, but it's lighter and airier than even that would imply. The opening is lively and citrusy, and then quickly turns floral. There are brief flashes of all the flowers listed in the notes (the complete list: neroli, citron, petitgrain, ylang ylang, magnolia, jasmine, calone, coconut, sandalwood and musk), including a lovely few minutes, early on, when the magnolia shines through. Then it settles into a transparent ylang, with fruity banana-ish undertones and hints of milky coconut.

Musc Monoï smells more like a tropical suntan product — I thought right away of modern sunscreen sprays — than a tropical drink, and happily for me, the calone is a mere whisper, just enough to suggest the sea, and not so much as to evoke sliced cantaloupe. The pale woody-musky dry down does a reasonable job of smelling like sun-warmed skin, but the lasting power is so-so, just like summer.

Verdict: I'm not sure why, but I didn't like Musc Monoï the first time I smelled it. Subsequent tries have brought me around, but not to the point of putting it on my buy list, despite the very tempting price of the 30 ml bottle. (I said this before, but props to Parfums de Nicolaï for continuing to offer a 30 ml size for less than $50 — it's one of the last great bargains in niche perfume.) For now, Musc Monoï is going into my purgatory basket, and hopefully I'll remember to dig it out for another try in July or August.

Note: top image is detail from a Rene Gruau advert for Jantzen swimwear, via Pinterest.