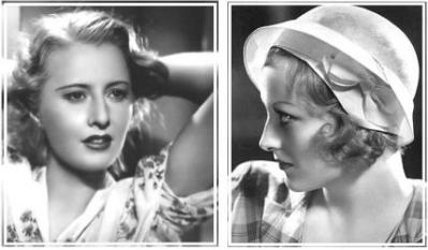 With this money I can get away from you. From you and your chickens and your pies and your kitchens and everything that smells of grease. I can get away from this shack with its cheap furniture. And this town and its dollar days, and its women that wear uniforms and its men that wear overalls…. You think just because you made a little money you can get a new hairdo and some expensive clothes and turn yourself into a lady. But you can't, because you'll never be anything but a common frump whose father lived over a grocery store and whose mother took in washing. With this money, I can get away from every rotten, stinking thing that makes me think of this place or you!

What could be uglier, more ruthless (and perversely “fun” — for an audience) than dialogue like this from the movie Mildred Pierce starring Joan Crawford. These words are spoken to Mildred (Crawford) by her hateful/ungrateful daughter, Veda.

Perfume fanatics, when sniffing a fragrance, “see” things, remember people, places, animals, plants…even if what we’re sniffing is awful, or banal. Sometimes, a perfume provides a complex scenario for me...it "clicks" — with a painting, an event, or in this case, films.

When I first wore Penhaligon’s + Meadham Kirchhoff Tralala,1 a woman from the so-called Golden Age of Hollywood came to mind: an actress morphing into a certain character type: a poor, tough, vulgar broad from the sticks, who rises up, takes charge of her life (and sometimes a rich man or two) and “makes it” (or does she?) I thought of Joan Crawford in Mildred Pierce and Barbara Stanwyck in Stella Dallas (both characters get ahead…but lose their guys, and their daughters who are ashamed of them). And then there’s the beautiful (but usually untalented) woman who can’t seem to make things work in life, though she dreams of success; she'll often, in old movies, find true love but not riches or fame. I’m thinking this time of Joan Crawford as Sadie Thompson in Rain and Marilyn Monroe as Chérie in Bus Stop. What's even more intriguing is the fact Crawford, Stanwyck and Monroe came from impoverished, troubled backgrounds, yet became legendary movie stars. What was going on in these actresses' heads as they played "characters" so similar to their own scary pasts?

In Veda's diatribe above, the words “frump” “cheap” “dollar days” “common” “washing” and “rotten” connect, for me, to Tralala, the perfume (by perfumer Bertrand Duchaufour). Tralala is about as far away from glamour as you can get; it smells of privation, cutting corners, making do, and exertion (it takes sweat to make it in this hard world, right?) Tralala is an expensive perfume made to smell cheap — on purpose, I assume. Perverse, yes, but I think it's a good match for the Meadham Kirchhoff design aesthetic with its tacky, vintage-y, Floozy-Meets-Romper Room clothes.2 Meadham Kirchhoff models often have on clownish, smeared make-up, and oily faces; do they represent kids playing grown-up or grown-ups refusing to renounce "playtime?"

Tralala goes on smelling like a sugary, artificially flavored soda pop of no distinct flavor...is it fruity? spicy? floral? No, it's just sweet. Tralala's opening aldehydes seem "exhausted," as if saying: "Honey, I don't have the time or inclination to sparkle, sorry."  After the head notes, Tralala flatlines and you get a constant, barely varying, "hum" of well-blended notes: some faint leather-saffron and candy violet, a vaguely "incense-y" note (it could just as well be described as "cigarette butt with lipstick stain"). Why did Tralala bring to mind Mildred Pierce, Rain, Bus Stop and Stella Dallas? Tralala smells the way I imagine the main characters in those movies smell — specifically how they smelled in their "early days" (or in the case of Rain and Bus Stop...how they smelled period). Tralala reminds me of the scents of Five and Dime face powder, rouge, hairspray and lipstick...with a $2 bottle of Eau de Something-or-Other sprayed on, too. There is also a tang of sweat (not cumin-y/cedar-y or masculine sweat, but the scent of female angst). In Tralala's base, the "smoke" note intensifies but stays close to skin (Duchaufour loves his ash and smoke.)

For all it brought to mind, I don't like Tralala; where's the FUN, the gumption, the "spark"? I assume Tralala's price is based more on packaging/bottle than juice; it has good lasting power and sillage and though it feels feminine to me, a man could wear it (there are lots of too-sweet/bland fragrances on the men's perfume shelves these days).

2. I'm thinking especially of the Spring/Summer 2012 collection and the Topshop collection from last Fall/Winter; examples here and here (video) and here.