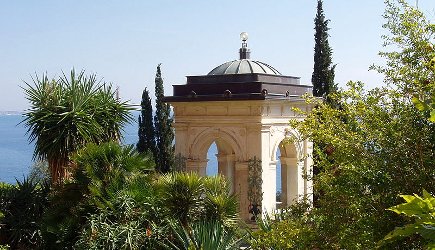 When I first started out in perfume, it was possible to aspire to some level of "literacy", as a consumer. That is, you could, if you spent a reasonable amount of time, energy (and money), acquaint yourself with the major brands — niche, mainstream and indie — and smell at least some portion of their products. It used to be fairly rare that a commenter (or contributor) at Now Smell This would mention a brand I'd never heard of, and I usually had at least a passing familiarity with any fragrance that came up for discussion.

These days, even determining which brands are "important" enough to bother with is a Herculean task. Commenters mention perfumes I've never heard of, much less smelled, every day (and I would not be at all surprised if many readers here smelled far more product than I do). When Jessica decided to review Gershwin by the Italian niche line Maria Candida Gentile, the brand was hardly even on my radar. I've now smelled two of their fragrances: Hanbury and Sideris. You all will have to tell me which others I ought to try.

Hanbury, named for the Giardini Botanici Hanbury in Italy, was a lucky choice for my introduction to the brand. It starts with a juicy blend of marmalade-ish citrus and orange blossom, lightly sweet and extremely cheerful. The calycanthus1 joins in shortly, and Hanbury turns rounder and fuller and spicier, with just a tinge of a green herbal-aromatic undertone (the notes: lime, bitter and sweet orange, calycanthus, honey, acacia, white musk and benzoin). As it dries down, mimosa and honey create a powdery-sweet base and Hanbury takes on a slightly old-fashioned air.

Maria Candida Gentile describes Hanbury as her most feminine fragrance, and it is certainly conventionally feminine, although I do think a man could pull it off. The lasting power is reasonably good but after a few hours, it's fairly close to the skin. 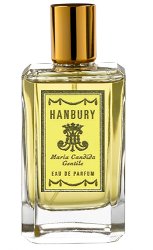 Verdict: It's extremely pretty, even charming, and best of all, it doesn't smell like anything else I can think of. I do like the opening better than the closing, probably because mimosa is not always a favorite of mine. After it had been on skin for about an hour, I started wondering if it was perhaps too charming for me: probably what I need is Hanbury Eau Légère or Hanbury Eau Été or some such, that retains the orange blossom and calycanthus but eases up on the sweet mimosa base. For now, Hanbury is going in my purgatory basket for later testing. I have a feeling I might like it better in colder weather, although if I had immediate and easy access to the 7 ml mini (7 mls! what a perfect size!) I'd be mighty tempted.

1. Calycanthus is also known as sweetbush, western or California spicebush, and Carolina allspice, and you can find it in Acca Kappa Calycanthus and Santa Maria Novella Calicantus.