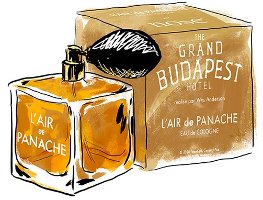 This perfume was created by Nose to honour "Monsieur Gustave H.'s style". He would never leave his hotel room without a spray of the elegant "Air de Panache"; an Eau de Cologne with an intense and tonic opening sublimated by aldehydes notes, which his most faithful customers love, and completed with a hint of mystery symbolised by a green apple. The heart is concentrated around jasmine, Grasse country flower, and rose, worn by the most sophisticated dandies. Finally, in order to truly discover the "Panache" spirit, we head back to the wild forest with gourmand and animalic notes.

The scent was developed by perfumer and Nose co-founder Mark Buxton, and will debut at the Paris premiere of the film on February 20; it will also be "on exhibit" at Nose for the duration of the film's theatrical run.