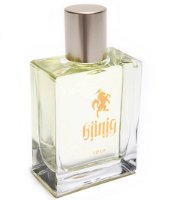 An homage to the king within, perfumer Yosh Han, introduces KÖNIG, a dark charismatic elixir fit for royals of yesterday and mortals of today. KÖNIG takes us to a deep, black Bavarian forest during the time of medieval kings.

This elegant masculine scent captures the dual nature of man - gentleman and hunter, an alpine fragrance that evokes a king on a hunt, racing through the Bavarian forest with aromatic bitters and crisp red apples in the air. Beneath a layer of snow flowers, it opens into a white musc and deepens into the scent of saddle leather and smoky firewood.

KÖNIG, is the second fragrance in the “M” Series by San Francisco perfumer, Yosh Han. Highly sought after for her exclusive bespoke perfumes, Han says, “The “M” series is a departure from the ethereal quality of my previous collections and explores fragrances that evoke our deepest nature. KÖNIG embodies the archetypal King in the mature masculine bringing the qualities of mythology into present time.” The modern man who wears KÖNIG embraces his primal instincts while honoring the king within.