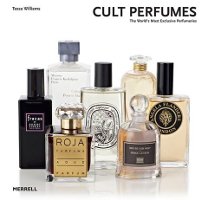 When I mentioned to a friend and colleague that I was reading Cult Perfumes: The World’s Most Exclusive Perfumeries, she thought it a pity that the book isn’t a scratch-and-sniff (or, more practicably, accompanied by a set of sample vials). If you’ve ever smelled a Lush store from a mile away, you can see the quirky appeal: the atmosphere within — or roiling out of — a fragrance shop is quite telling.

Even so, Cult Perfumes tells a lot for a book that is technically meant for the coffee table. Author Tessa Williams, a British journalist whose byline has appeared in Vogue, Marie Claire and Elle, catalogs the past and present of 26 “extraordinary niche perfumeries throughout the world,” with quick nods to 15 more in the back. Gorgeous art is peppered throughout, including historic advertisements, snapshots of the shops, and, of course, lots and lots of gorgeous bottles.

If this sounds right up your alley, before hitting “buy” on your Amazon cart just note that the title’s “cult” really does mean “boutique” and take a quick peek at the 26 featured perfume houses.1

Some truly were pleasant surprises. I’ve never heard of Angela Flanders, a former costume designer whose Victorian-style East London shop is only open on Sundays during the neighborhood’s flower market (I want to go there).

But overall I find myself scratching my head a bit at the featured selection. Old houses with apothecary lineage are in full force with Penhaligon’s, Grossmith, Houbigant and Santa Maria Novella; but as for the new vanguard, only a short blurb on Le Labo in the back? Nature-friendly Miller Harris but nothing on Aftelier, Dawn Spencer Hurwitz or Honoré de Prés? Frédéric Malle, the patron saint of auteur fragrances, but again just quick notes on Andy Tauer and Kilian Hennessy? The fashion-first Robert Piguet, but no nod to the boutique leanings of Hermès, Chanel, Cartier, or Van Cleef & Arpels?

Granted, any short list is inherently subjective, and in this case the point of view is Williams’. It’s worth noting that she’s writing for a British audience first, which goes a long way in explaining why so many seemingly redundant, London-based houses made the cut while Antonia Bellanca of Antonia’s Flowers is the only featured American. Who can objectively say that Williams didn’t gracefully navigate some tough decisions?

So while my own selection would have been quite different, that doesn’t detract from Williams’s excellent work. It does, however, bring the $49.95 price tag into the equation — especially if you would expect to see a particular favorite or two in lush, glossy print. Otherwise, objective lovers of all things niche can’t go wrong.