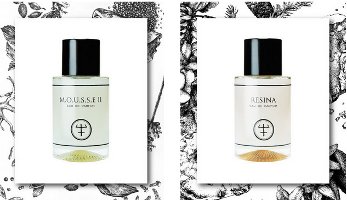 M.O.U.S.S.E. ~ "M.O.U.S.S.E is Oliver Valverde’s first creation. Originally thought as a simple yet potent fragrance, created with the intention of producing something slightly wild and at the same time sophisticatedly out there. The iso e molecule amplifies and heightens the fragrance’s thickness and spiciness. A curious combination. A vital and optimist scent." With sandalwood, oak moss, clove, lavender, lime peel, aldehydes and musk.

La Colonia ~ "Don’t let this classic name fool you. This is not your grandfather’s cologne. LA COLONIA is an experiment based on all that’s volatile, yet at the same time, ultralight. A fresh, green scent for today’s modern times. LA COLONIA blends unusual elements such as ozone, dill and green pepper with ingredients found in classic colognes, including cedar, bergamot, citrus and jasmine." Additional notes include lily of the valley and sandalwood.

Resina ~ "RESINA is the combination of experimenting with the most aromatic resins available in perfumery. Ingredients included in this olfactory libation are opopanax, myrrh, incense, benzoin, elemi, labdanum and many others. The outcome is a rich and sumptuous perfume filled with spicy and unusually floral textures. All of these ingredients are combined with the rare essence of the Australian Fire Tree, configuring an avant-garde yet comprehensible fragrance." Additional notes include Tolu balsam, coffee, jasmine, Australian fire tree, rooibos, nutmeg, tonka bean, fir balsam, ginger and star anise.

Vetiverus ~ "VETIVERUS’ formula was bred from the collision of two prime materials who are very different in each of their own nature: the Osmanthus flower and the Vetiver root. With its unmistakable dry and woody notes, Vetiver is one of the most common ingredients in classic and modern perfumery, while the rare Osmanthus flower absolute is reserved for the most high end perfumes in the world. This flower has particularly unique combination of apricot fruit and floral notes yet milky and leathery at the same time. With VETIVERUS, vetiver takes on a new identity, less woody and obvious, acquiring an obscure, sophisticated and erotic voluptuousness." Additional notes include labdanum, styrax, ambergris, orange peel, patchouli, musk, coriander and clove.