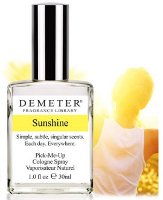 Demeter has launched Sunshine, the latest addition to their Fragrance Library, and First Response - Boston, a fragrance to benefit the Boston First Responders Fund.

Sunshine (shown) ~ "What does Demeter's Sunshine smell like? Think of your favorite, most comfortable cotton T-Shirt left outside and warmed by the sun. We thought long and hard about what elements we could use to express the idea of Sunshine. After a debate that lasted more than a year, we decided Cotton, warmed by the sun, was the smell that best represented the idea of Sunshine Now we had a direction, but executing that direction was easier said than done. It took almost another two years until we felt this fragrance was done. Let us know if you think it was worth the wait." Demeter Sunshine is available in 15, 30 or 120 ml Cologne ($6 – $39.50) and in matching bath & body products.

First Response - Boston ~ "Americans are a wonderfully diverse people, but generally speaking, we do not agree on all that much. But we certainly agree that we take care of our own, so no one was surprised to hear about the Boston First Responders Fund, which has been set up to help the victims of the Boston Marathon Bombing. The Fund will be administered through the Boston Firefighter’s Credit Union, which is the host site for taking online donations. At Demeter, we want to do our part, too. So we created First Response - Boston, a combination of spices and flowers, overlaid with white smoke and rubber." Demeter First Response - Boston is available in 30 or 120 ml Cologne ($20 – $39.50).