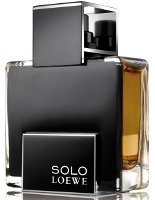 For the man who finds his balance through contrasts. An exclusive and original Eau de Toilette, underlined by a chord of tea and black leather which has never been used before.