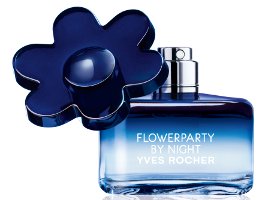 FlowerParty by Night was developed by perfumer Philippe Romano, who was also the perfumer for the original Flowerparty fragrance. Notes include licorice, bitter almond, licorice and vanilla.

Yves Rocher FlowerParty by Night will be available in 30 and  50 ml Eau de Toilette and in matching body products.