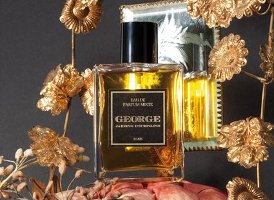 GEORGE is born of a marvellous olfactive adventure linked to a double passion for gardens and literature.

After the range of scented candles and bath products, here is the first Jardins D’Écrivains eau de parfum for men and women.

It is easy to guess the source of inspiration from its name… GEORGE.

The message is loud and clear... singularity, modernity, elegance and complexity, and consequently a certain approach to the metaphysics of appearances.

GEORGE was just that... indefinable, man and woman, at ease with and amused by both statuses.

The George eau de parfum is for men and women who know who they are and who like to reveal a brief glimpse of their soul in the fragrance they leave behind them.