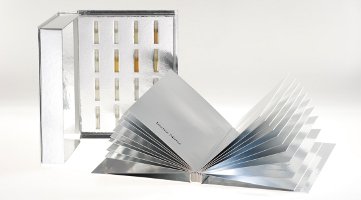 Artist Eduardo Kac's Aromapoetry is "a book to be read with the nose":

Aromapoetry is a new kind of poetry in which the compositional unit (the poem) is made up of smells. The poet "writes" the smells by conceiving the poem as an olfactory experience and then employing multiple chemical procedures to achieve his poetic goals. It goes without saying that, as in any kind of poetry, the reader is an active participant that interprets and thus ascribes his or her own meanings to the poem beyond the writer's original motivations.

In my book Aromapoetry, the first book ever written exclusively with smells, readers find twelve aromapoems that range widely in their material structure and semantic resonance. While I composed some of my aromapoems with only one or two molecules, most of them are composed of dozens of molecules each. In some cases, a single poem has distinct olfactory zones on the page—each comprised of dozens of molecules each. In other words, the level of molecular intricacy of the works in Aromapoetry varies from the very simple to the extremely complex.

I composed the twelve poems in Aromapoetry so as to provide the reader with a broad field of aromatic experiences. The titles simultaneously delineate and open up the semantic sphere of each work. Each poem is a distinct and self-contained composition. At the same time, the book has a dynamic internal rhythm produced through the alternation of different or contrasting smells.

Every poem in the book Aromapoetry employs nanotechnology by binding an extremely thin layer of porous glass (200 nanometers thick) to every page, trapping the odorants (i.e. the volatile molecules) and releasing them very slowly. Without this nanotechnology, the fragrances would quickly dissipate and the smells would no longer be experienced after a few days. To ensure even greater longevity, a set of small bottles is integrated into the book, allowing the reader to recharge every individual page. With an eye to the distant future, the book’s summary presents key molecules used in the production of each poem.

Aromapoetry is a book to be read with the nose.

Aromapoetry was produced in ten signed and numbered editions. It can be seen at the exhibition Seeking Silicon Valley at the ZERO1 Garage in San Jose through December 8.