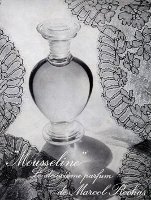 Clams casino, handwritten diaries, gold lamé house shoes, paper dictionaries: certain things are slipping away. To some of these I wave a hearty goodbye — that would be you, dial-up modem — but other changes I note with a pang. Sure, some of the regret is pure nostalgia. I love the full-throated trill of a dial telephone, for example. But some of it is a lament for changes in fashion, in what’s considered beautiful. That's how I feel about some perfume. No publicly traded company in its right mind would make a heartbreaker of a chypre like Rochas Mousseline these days. That’s too bad.

Perfumer Edmond Roudnitska developed Mousseline, and Rochas released it in 1946, just two years after Rochas Femme. Information on Mousseline is scarce. My parfum is at least 45 years old — quite possibly older — but it’s clearly a fruity chypre and Femme’s little sister. My “flacon sac” perfume came in a tiny, black lace printed splash bottle accompanied by an inch-and-a-half long eyedropper for extracting the precious extrait.

I picture a woman settling into her car after a day of shopping. She’s mastered the sit/knees together/swing of easing into a car with heels and a shapely skirt. She pulls off her gloves and reaches into her purse for her cylinder of Mousseline. She nudges aside the veil on her hat and with the eyedropper delivers a drop of the amber-colored perfume behind each ear. Next stop, a fancy hotel for cocktails.

Mousseline is a perfume of the grand tradition in which a fragrance is more its own being than an assemblage of easy-to-identify notes. I smell stewed plums that don’t overwhelm a floral heart, cool violet leaf, dulled (by time?) jasmine, perhaps a touch of carnation, rooty vetiver, sandalwood, musk, and plenty of real oakmoss. Mousseline isn’t sweet or particularly fruity, floral, or animalic, but seems to rest on its lush chypréed base notes. Of course, this may be due to its age. I wish I could have smelled it new when it probably lived up to the wispy translucence of its name.

I wouldn’t be surprised if Mousseline contains a touch of the oily-rich secret ingredient called “Vat 5” that went into Femme. When I was at Art et Parfum with Denyse Beaulieu,1 Olivier Maure brought us paper strips dipped into Vat 5’s tarry liquid, and a whiff brought up Femme’s butch core, the genius that elevated Femme from a girly-girl perfume to a complicated, womanly fragrance. Mousseline shares that thread of toughness.

These days, Mousseline would suit the same occasions that would welcome Femme. For the confident person, that means just about any occasion that would hold up to a flash of character. Mousseline has enough body to suit cooler weather and evenings, but I’d imagine that an Eau de Cologne version of the fragrance would bloom on an August day. Mousseline isn’t quite as easy as Femme, though. Femme comes at you with parted lips, but Mousseline demands playful banter before you’re allowed to touch her elbow.

They say fashion has cycles. I think for challenging perfumes to return to vogue, it’s not just fashion, but culture, that must evolve. Fragrance will need to be valued as visual art is, or music. But even with that, the murky chypre might never command the audience it once did. That’s O.K. Style trumps fashion every time, and in my book, perfumes like Rochas Mousseline will always be stylish. Let’s just hope there’s always a little bit of Mousseline’s type around for us to appreciate.

What are you sad to see pass out of fashion, both in perfume and in life in general?