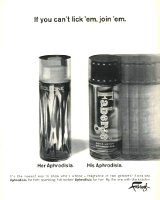 Sometimes I try to ignore the existence of vintage fragrances on auction websites, and the raves they may receive on the perfume blogs, because what's the point of falling for something that's already discontinued or reformulated beyond recognition? And I'm usually pretty successful in this effort. Recently, however, I was intrigued by author M.J. Rose's description of an unnamed men's fragrance in her novel The Book of Lost Fragrances, and when I learned that Fabergé's Aphrodisia (the men's version) had been her inspiration for that scent, I wanted to know more. Thanks to a kind Now Smell This reader, I now own a bit of Aphrodisia (the women's version), and I'm hooked.

According to my trusty copy of The H&R Book: Fragrances Guide, Feminine Notes, Fabergé Aphrodisia is a "fresh-mossy-aldehydic" chypre that includes top notes of bergamot, lemon, neroli and fruit; middle notes of rose, honey, ylang-ylang, carnation and jasmine; and base notes of oakmoss, vetiver, civet, ambrein and musk. Aphrodisia was released in 1938 and was available in various concentrations throughout its lifetime. I've been wearing a cologne version that seems to date from the 1960s. I'm not sure when this fragrance was discontinued, but it was still in circulation when the H&R guide was published in 1984.

When I do try a vintage fragrance on my skin, I give it a few extra minutes to "set" before I sniff my wrist, so I did this with Aphrodisia. The first impression it gave me was a richer, fruitier take on a classic cologne, with the lemon note smelling candied or preserved rather than freshly peeled. A half hour later, I was enveloped in a spicy, honeyed floral. Aphrodisia's heart contains a lovely carnation note, the sort that is becoming woefully rare these days (due to reported restrictions on certain ingredients). I'm a longtime carnation lover, so this phase of the fragrance made me particularly happy. A soft yet rounded rose note also made a brief appearance, only adding to my delight.

Aphrodisia's base is the kind that will make vintage fragrance lovers smile a "they-just-don't-make-them-like-this-anymore" smile, although it will probably seem stereotypically musty and "old" to anyone who prefers her perfumes pink and clean. It's not the most distinctive part of the fragrance, but it's wonderfully typical of its era: a mix of musk, oakmoss, and ambergris (a legendary aphrodisiac!) that doesn't exist as such anymore. It's not heavy, however, and just enough of the honey-floral-lemon notes linger to add some brightness and sweetness. Aphrodisia is long lasting, even in cologne form. I don't know how it was originally priced, but it was probably quite a good value.

Lastly, adding to this experience of mixed emotions, something about Aphrodisia reminded me of my grandmother and her perfumes. I don't think she wore this specific fragrance, but she did love carnation perfumes, and the overall "feel" of this one fits her era. I'll think of her whenever I wear the rest of my decant (thanks again, S!). I might even be inspired to try a few more vintage scents from Fabergé and similar lines, even if I risk losing my heart to other vanishing fragrances.

To read about another vintage Fabergé fragrance, see Angela's review of Tigress here.