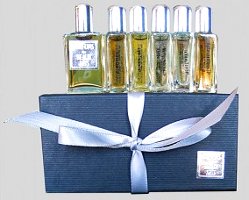 The Collection consists of six perfumes that start at YSL’s beginning at Dior and his first triumph, the “Ligne Trapeze”, a cool and sophisticated violet-aldehydic perfume with a warm, animalic drydown; Next to “The Beat Look”, referencing the Americanization of French culture during the late ‘50’s and taking inspiration from YSL’s first perfume launch “Y”. The Beat Look is an aldehydic-fruity-floral-chypre; “Le Smoking”, speaks to the start of an ongoing theme in YSL’s work (the women’s tuxedo) and the women’s liberation movement of the 1970’s. Of course, Le Smoking is a green-chypre-tabac fragrance with incense and hints of marijuana cigarette. We next move to “Euphorisme d’Opium” which takes many of it’s cues from the now discontinued original design of YSL’s landmark fragrance “Opium”, a spicy-narcotic-oriental perfume; and into the 1980’s with “La Vie en Rose”, a sparkling rose-violet perfume modeled on YSL’s 1983 launch of “Paris” perfume and his unmistakable “Paris Bow” gown. Lastly, a floral-floral, linden blossom and wisteria creation befitting the icon that YSL became called “Ma Plus Belle Histoire d’Amour” was inspired by a radiant floral motif, silk evening coat found in the retrospective show.

Dawn Spencer Hurwitz Ligne Trapéze, The Beat Look, Le Smoking, Euphorisme d'Opium, La Vie en Rose and Ma Plus Belle Histoire d'Amour are available in a boxed set (shown) of all six fragrances in 5 ml Eau de Parfum, $90. A sampler of all six in 1 ml is $45. The scents can also be purchased separately, 10 ml Eau de Parfum for $55 or 5 ml Parfum for $45.