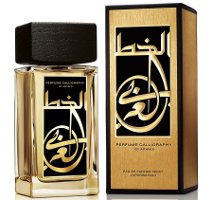 Inspired by the beauty and prestige of the written word, Perfume Calligraphy by Aramis reflects a perfect pairing of ancient crafts, where Arabic script and modern fragrance come together as an artistic expression of one’s own personal style.

The fragrance captures the essence of the Middle Eastern woman and man by reflecting traditional roots with a modern twist. High quality ingredients and a long lasting signature ensure the fragrance portrays luxury and richness. The bottle, lit from within, in highlighted by an intricately detailed rich gold backdrop and is surrounded by the sense of Oud and Rose.

Aramis Perfume Calligraphy can be found now at Harrods in the UK, £105 for 100 ml Eau de Parfum.

(via harrods, additional information via thechicgeek.co.uk)