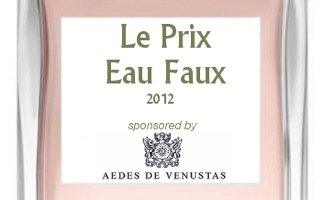 Here they are, the finalists for the 2012 Prix Eau Faux, our contest to honor creative fragrance writing or “faux ad copy” (you can read about the contest here). Huge thanks to everyone who entered!

The judges (me, Alyssa, Angela, Christine, Jessica, Kevin, and Musette from Perfume Posse) have whittled the field of 54 entries down to 8 finalists.

In order to make this as fair as possible, I won’t post the names of the entrants until after the winner is selected, and I respectfully ask that the entrants not “campaign” for votes here or elsewhere…just let the best entry win. Votes will be taken through 10 pm (Eastern Time) Sunday, and I’ll announce the winner on Monday.

Here are the entries, presented in the order in which they were received:

Le Premier fragrance by acclaimed niche master M. Daniel Cez for La Plus Que Lente Sensuel. We are too happy to share for our new fragrance this spring to open up the world to new sensations of love and our bodies with the world. A Votre Sante, tout le monde, a les Nez!

EPONYMOUS YOU the smell of you and love sourced from natures skin source pheromone organic molecules and sensuous black pepper et delice green fresh poivre. The touch aroma available in spring for sun and skin in light dress in a radiant bottle by our niche artist M. Daniel Cez de La Plus Que Lente Sensuel EPONYMOUS YOU 30, 1.5, 100 and dry oil, everywhere

Ever wanted to take the friendly skies with you? With Rhapsody, now you can get on board United even if you’re not flying. Rhapsody is the first fragrance designed to simulate the joy of flying. Featuring notes of stale cabin air, jet fuel fumes, weak generic coffee, flight attendant drugstore perfume, and the seatmate next to you in Seat 28E, Rhapsody takes you away without taking you away.

United Rhapsody is available in the SkyMall catalog and at duty-free shops in key United hub airports. A TSA-approved 1.7 oz bottle of Rhapsody starts at $59 or 5,000 MileagePlus miles. (Please note that pricing varies based on advance purchase requirements, blackout dates, and optional fees.)

“Parfums Verité offers the art of perfumery as a tool for achieving self-individuation in an uncaring universe,” says company founder Antoine Meerschaum, Ph.D.

Meerschaum proudly introduces Essence Precedes Existence, a 100 ml EDT that elevates the act of fragrance application to the level of public performance art. With a retro-style bulb atomizer that doubles as a 128 decibel air horn, every blast delivers a pre-measured dose of fragrance and sound that is guaranteed to be smelled—and heard—a mile away, but all too briefly, resulting in the need for frequent reapplication. “This is a deliberate meditation on the fifteen minutes of fame experienced by every individual,” says Meerschaum, who sought to improve upon the sillage of Angel and Giorgio. “It is about the recurring need for self-assertion and self-reinvention throughout the life cycle—the cri de coeur of one who knows no taboos and who bravely repudiates the silent, odorless void that we call death.”

Essence Precedes Existence is a fruity floral with a vanilla drydown. Earplugs are included free with purchase.

Oh, how looks deceive, when what first appeared so sweet, so feminine, so light, devolves into the unexpected, the dark, and the dangerous. She curtsied in on muguet, chamomile, and just a grin of rockrose; so sweet and well behaved, and you were as charmed as that little boy on the dock, the one who trusted her. Suddenly there is a flash of aldehydes, warm woods and coriander and you see what she is capable of, but now it is simply too late; the damage has been done and you are left staring at your reflection in a pool of dank musk, mired in myrrh, with petals of saffron floating on the surface and hiding what lies beneath. Like her mother, you cry out, “Make her stop, make her stop!”

The Bad Seed.
One of one from Scent Spectrum….. where scent meets psychosis.
Where do you fall?

Four-time Grammy winner Fairleigh Lowd celebrated her 19th birthday with a party to launch her new signature fragrance, Fairleigh Fanged. A starkly haunting scent melody combining "the aromatic darkness of a chained iron gate and the virginal innocence of white petals," Fairleigh Fanged was a huge hit with fans who crowded into L.A. club, De Basement, to sample FF and admire the ruby glass bottle with its faux ivory tooth dangling from the neck. Fairleigh explained her fragrance's name as "--kind of a thing about being scared about being in love, right? 'Cause my boyfriend Mox is kind of like a vampire and everything, but really romantic, you know?" And that bottle, vaguely reminiscent of a vial of blood? "I know, right?"

I spent an afternoon recently with Ko N., the heron-legged designer famous (perhaps infamous?) for his design philosophy of Diminishment, "NOT minimalism, which implies accomplishment; there is ALWAYS more to eliminate." In clothing, Ko N. eschews zippers, pockets, hems and seams; now he has designed, with perfumer Heinz Horst of Berlin Technic, "a fragrance without odor." At my suggestion that Ko. N. might have been a difficult client, Mr. Horst nodded affably, "He knew what he wanted, and that is good: no florals, no aldehydes, no aromatics of any kind. He demanded "a smell of ice, or of air, but not ALL of air--just those floating particles." Meaning dust? "Precisely--and it was not easy, I assure you, to find the correct dust, though after testing samples from over 1500 locations, we discovered the perfect dust within our own laboratory." The resulting fragrance, "Mote," made me wonder aloud whether, as the bottle bears no label, its name might be mistaken for "Emote." "You have made me ill now," said the designer.

Marie Curie is the perfume for the woman who exudes an intense energy that originates from deep within, penetrating those around her to the very core of their beings. This scintillating fragrance is a fusion of highly charged notes, including Electron and Sterling Silver roses, golden amber, and platinum lily. The scent is extraordinary, seeming to virtually glow with a soft but persistent light, and its beauty is exceeded only by its longevity, one drop being capable of radiating exquisitely for up to 3000 years. This rare and precious perfume is housed in a bottle modeled after the classic Erlenmeyer flask, made of quartz crystal and encased in a protective lead shield. Priced at $226.02 for 88 ml.

Soon to be released will be our first men’s fragrance, Bunsen, for the man whose passion burns with a blue-hot flame.

Monet painted his beloved Giverny even as his sight failed; Beethoven composed masterpieces while losing his hearing to the French malady. So it is altogether fitting that Montgomery Fotherwill, celebrated mortician to the stars, embrace his destiny as a parfumeur par excellence despite relentlessly progressive psychosomatic morgue-induced anosmia.

Parfums de Fotherwill makes its debut with Saloud!, a toast to the days of old Hollywood glamour and the zenith of the funeral parlour industry. Saloud! evokes the drama of hushed voices muffled by heavy carpeting; the electric tension between multiple ex-spouses; and, of course, incomparable maquillage, on the living as well as the lately deceased. Notes include black dahlia, pancake makeup, formaldehyde, and agar rot.

Another update: if you entered the contest but your entry did not make it to the finals, and if you would like your entry posted so others can read it, please either email me or leave a comment here...I am going to post those entries a week from Saturday, on April 28th.