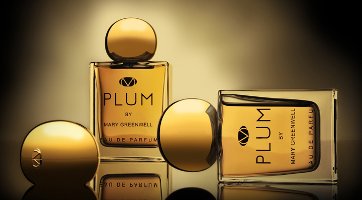 One morning last week I lay on the acupuncturist’s table, stuck like a pomander, trying to identify the familiar yet elusive note that carries Mary Greenwell Plum. It wasn’t plum — that much I knew. Maybe it was the lobotomizing New Age music or maybe the needle planted smack in the middle of my forehead, but the answer came to me all at once: Smuckers. Smuckers grape jelly, to be precise.

Mary Greenwell Plum hit the market in October 2010 and quickly became a must-sample fragrance. It had a lot of promising features: its perfumer was François Robert, accomplished nose and descendant of the legendary Guy Robert and Henri Robert; it was a chypre; and it was hard to find.

Mary Greenwell is a British makeup artist who made her start prepping a teenaged Brooke Shields for a Francesco Scavullo photo shoot. From there she rose to land regular gigs with Vogue magazine. Her website says she spent two years with Robert creating Plum. Robert, who reports a slightly different figure, six months, working on the fragrance, said, “She was in love with another fragrance, I just had to create a different fragrance to win her love.” (Aren’t you dying to know what that other fragrance is? And why she wanted to create a different fragrance when she already had one she loved? I am.)

Some reviews don’t find Plum to be much of a chypre, but to me it does ring in as an old-fashioned chypre. But it has a hole in it. I smell lots of nose-tingling grape jelly mixed with gardenia (reminding me just how fruity gardenia is) and the dirty, almost tarry mossy base washed with soap. Plum has lots of high notes and low notes, but for me not an entrancing heart. It’s just — purple grapes.

So, for a full picture of Plum, let’s go back to the grape jelly. Imagine the grape jelly in single-serve packets, the kind you get in a diner. Now picture a woman of a certain age, a smoker, who tucks a few of these grape jelly packets into her purse and forgets about them. After a week, the warm fruit of the jelly packets combines with the cosmetics smell of her lipsticks, hand lotion, and a perfumed handkerchief. A bruised guest soap pilfered from a hotel floats around with it. The fragrance of old cigarettes infuses the mix. Presto: Plum.

I’m glad I smelled Plum, and I’m glad it’s out there for sale, but it doesn’t suit me. It feels too mature, too insistent for me. (It lasts a robust six hours with generous sillage). Plum might better suit someone who holds regular appointments at the hairdressers, is comfortable with a perfume featuring a strong violins section, and who smokes. And it’s certainly not a good one to wear during acupuncture.