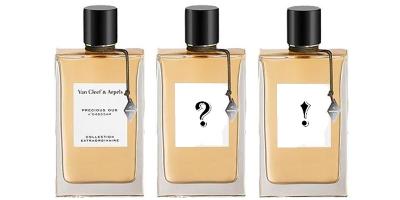 Though it bears the name “oud,” I don’t detect any oud in Precious Oud. Has the oud perfume trend degenerated to the point of simply including the word “oud” in a fragrance name and no longer worrying about having oud in the perfume? That’s pretty amusing, if it weren’t pathetic, too.

Precious Oud goes on smelling sugary and creamy, like the scent of caramels (and not expensive caramels either, but the type you get in plastic bags from the drugstore). As Precious Oud develops, “flavorings” appear: vanillin liqueur, persistent/syrupy/too-sweet jasmine, patchouli-lite, and coconut (to approximate sandalwood?) As for “oud,” the only oud-ish scent in this concoction smells like a “fresh” fragrance note riding piggyback on white musk. Having just completed a rigorous spell of oud-perfume testing, Precious Oud fails the oud test.

With or without oud, Precious Oud smells bland, and it doesn’t fit in with the Collection Extraordinaire idea of exclusivity and luxury. To me, selling Precious Oud for $185 is outrageous.