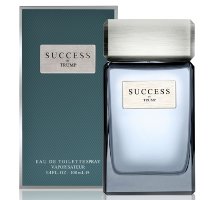 Donald Trump Success by Trump will be available in 50 and 100 ml; it will be a Macy’s exclusive at launch time.