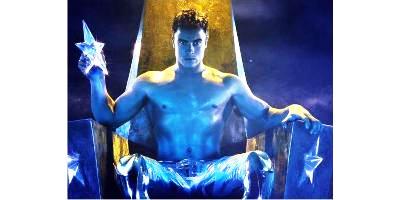 Pistorius is the 25-year-old South African 400-metre runner who has been called “the fastest man on no legs.”* Pistorius was born without a fibula in either leg; his lower legs were amputated when he was a baby and he’s been using prostheses since he was 13 months old. Pistorius’ J-shaped carbon-fiber prostheses look “dramatic” and futuristic, and they play a big part in the A*Men advertising campaign (especially the video).

With Pistorius in the forefront of A*Men Pure Shot, I was expecting a sport fragrance, and that’s what I got. Pure Shot includes fragrance notes of mint, juniper, white pepper, sequoia wood and patchouli. Pure Shot opens with strong alcohol-pepper and a slightly sweet “mentholated” accord (if you strain, you can smell something “minty”). Quickly, the “sequoia wood” note appears (smelling like synthetic cedar) and brings with it some necessary “sweat” to this workout perfume. The patchouli and musk notes that finish Pure Shot’s scent progression are wan and tame and smell utilitarian — like fabric softener or dryer sheets. Perhaps the simple “idea” for Pure Shot was a medicinal muscle rub followed by some sweaty exercise followed by a shower and a load of laundry?

Pistorius is the most interesting part of the Pure Shot story; if he qualifies for the London Olympics, he’ll be the first person without biological legs to compete in a running event at the Olympics.* Pure Shot qualifies easily for a spot in the dull/innocuous mainstream sport fragrance category. (Some AXE fragrances smell more interesting than this.)

An aside: I’ve always hated the Mugler men’s plastic-encased perfume bottles (they are clunky and cheap-looking). I’ve been curious about their construction for years, and when I noticed my knife-wielding partner near my bottle of Pure Shot, I could control myself no longer — I had him cut off Pure Shot’s white plastic-vinyl casing (a very difficult task). Underneath the white covering is a nice-looking blue bottle (see image, above right) with an embossed star. Unfortunately, the form-fitting unrecyclable casing renders the glass bottle unrecyclable too.

Thierry Mugler (limited edition) A*Men Pure Shot (100 ml Eau de Toilette, $85) has good lasting power and sillage; beginning this month, it will be a Nordstrom exclusive in the U.S.