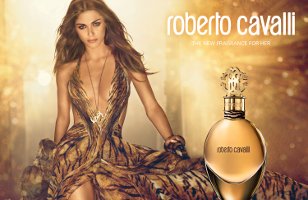 So, we’ll make this a short review then go on to a game. Perfumer Louise Turner developed Roberto Cavalli for Her. PR materials call the fragrance an “exuberant” and “sensual” floral amber with notes of pink pepper, orange blossom absolute, and toasted tonka bean. The Macy’s website adds Mirabelle plum. The fragrance opens with a fizzy, pretty combination of what smells to me like peach mixed with honeysuckle. So far, so good. Not original, maybe, but juicy, fresh, and warm. This is the first impression that sells a thousand bottles.

After fifteen minutes comes the deal breaker: a wave of the nauseating, bug-spray woody musk that dominates way too many new releases often positioned as neo-chypres. It’s the one smell in perfume that gives me a headache. The woody musk is hard to describe, but if you’ve smelled it, you’ll know what I mean. It smells synthetic and stifling, like a mohair sweater sprayed with Raid and swathed in hot Saran wrap.

Roberto Cavalli for Her has terrific lasting power, and a spray in the morning from a sample vial persists until dinner. Dabbing rather than spraying seems to mute the musk and bring out the peaches, and I like it better that way, but all in all I hope never to smell it again. If you like Roberto Cavalli for Her, please comment!

Now for the game. Let’s pretend you are responsible for creating Roberto Cavalli’s new fragrance. Lucky for you, the PR materials have already been made up. You know the fragrance needs to conjure the image of a sylph-like brunette barely clad in tiger-print chiffon who makes a play for an swarthy, unshaven skinny guy. A tiger follows her around. Also, thanks to an interview at People.com, you have a few more clues: Cavalli envisions Jennifer Lopez singing and dancing wearing his perfume, and adds that it’s for “a woman full of energy.” Finally, Cavalli’s mother used to wear “the most horrible, cheap perfume,” and his is “soft, delicate…not too much.”

Got it? What would you create?

Me, I’d take an unconventional approach and suggest a perfumed oil in a tinier version of the current Eau de Parfum bottle. The medallion lid would have a dabber attached to it. I’d position it as “precious” to be dotted “intimately” over the body. Plus, in an oil form, it wouldn’t be as diffusive as whatever it was Cavalli’s mother wore. Scent-wise, I don’t see Cavalli as very edgy, and his patrons probably value “sexy” over “inventive.” So I’d go with a fruity oriental with amber, vanilla, patchouli, and mandarin orange framing a heart of the crisp, intoxicating, and very rare (in fact, nonexistent) orchid, the cattelya maewestii (see how I cleverly wove in the name of my cat? Supports the tiger theme, too).