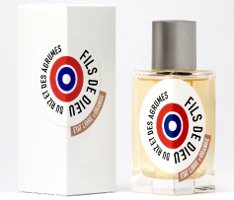 Fils de Dieu du riz et des agrumes (shown; formerly announced as Philippine Houseboy) ~ "He brings the sun. Here, find an innocent wisdom that points to dreams and liberation. This is the golden eye that reflects beauty and conflict, rapture and pain. Philippine Houseboy is an emotional fragrance, a scent that requires a sympathetic connection between the server and the served, the giver and the taker, and the willingness to exchange roles." Developed by perfumer Ralf Schwieger, with notes of ginger, coriander leaves, lime, shiso, coconut, rice, cardamom, jasmine, cinnamon, may rose, tonka bean, vetiver, musk, amber, leather and castoreum.

Bijou Romantique ~ "This is the portrait of a lady. She can be seen in the feminine cameo, in the soft, delicate profile, in the dreamy image of an incandescent beauty. What once was shell has been carved in relief by a devoted artisan, to emerge as an idealized woman. Jewels, too..." Developed by perfumer Mathilde Bijaoui, with notes of bergamot, lemon, pink pepper, ylang-ylang, sage, iris, coconut, vetiver, benzoin and vanilla.

Update: see a review of Bijou Romantique and another of Fils de Dieu.