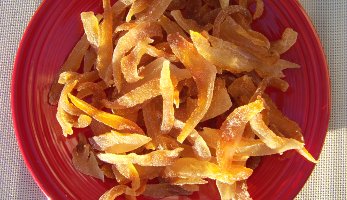 Surely the fact that peak citrus season falls smack in the middle of winter is a sign the cosmos is not entirely without mercy. Just when we’ve thrown away our holiday trappings, the supermarkets brim with flashes of color. Even the humblest corner bodega has good oranges right now. My amazing local grocery store is having its annual citrus festival, and the produce section is crammed with so many exotic varieties that I brought my camera with me on my last shopping trip.

The fruit was piled high in fragrant chaos — pale chartreuse pomelos the size of melons nestled alongside orange-red kishu tangerines no bigger than a kiss. White, pink, red and yellow grapefruits kept company with a dozen different varieties of oranges, including sour Seville oranges begging to be roasted with duck, and blood oranges with their deep maroon flesh and Cara Cara oranges that are supposed to taste of raspberries but tasted, to me, exactly like a sweet-sour Pixie Stick. Not only were there kumquats (and I ask you, is there a more adorable fruit than the kumquat?) there were limequats and mandarinquats (which I keep wanting to call manquats, though I can see why they didn’t). There were real live bergamots, round as cue balls, and wrinkled, deflated yuzus, both of them smelling — when I dragged a nail across their peels — twice as heavenly as all the teas and candies and perfumes that feature them. 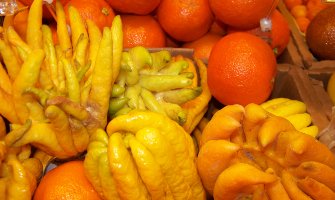 And most importantly, my scent-loving friends, there were citrons.

The citron, also known as the cedrat (in France), or the kou-yuan (in China), and in classical times as the Persian or Citrus Apple, is a large citrus fruit found in the Mediterranean, Puerto Rico and throughout south and central Asia. While a few varieties are prized for their juice, most have little pulp — the peel’s the thing, candied or in preserves. But for our purposes, and that of people wherever they are grown, the point of a citron is that a ripe one can fill a room with its scent. 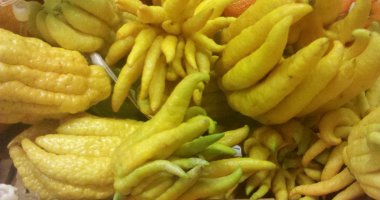 My market featured two varieties: the Etrog, traditionally used in the Jewish Sukkot ceremony, which looks like a bumpy, bright yellow child-sized football (if left on the tree they will continue to grow for years until they break the branch), and the Fingered Citron, or Buddha’s Hand, which looks like an enormous lemon crossed with an alien octopus and wins my prize for Most Psychedelic Fruit until something crazier comes along. Naturally, I bought two of them.

Buddha’s Hands, as their name suggests, are often placed on temple altars as fragrant offerings. I put one on the shelf in my study that I keep for my own version of such a thing, and one at the head of our bed. I was skeptical at first — I couldn’t smell much when I brought my nose directly to the fruit. But sure enough, after a few days the fruits perfumed the air with a rich but delicate scent that appeared and disappeared, catching me deliciously off guard as I walked through the room or fluffed up my pillow in the middle of the night.

Perfumer Ayala Sender, who has been writing on her blog about her efforts to create an Etrog perfume describes the scent as resembling pineapple and flowers. To my nose, they smell like a rounder, deeper version of my beloved Meyer lemons, somewhere between lemons and apricots with a floral quality reminiscent of osmanthus. Sweet but ethereal, it is a perfect scent for reading, writing or drifting off to sleep.

After a few weeks, one of the Buddha’s Hands began showing some brown spots, so I decided to preserve their scent by candying them. When I began writing this post, I looked up several recipes for candying fruit and realized that I had inadvertently followed none of them. Both the recipe Victoria Frolova of Bois de Jasmin recently posted for candied orange peels and food blogger David Lebovitz’s citron-specific recipe call for boiling the fruit to reduce bitterness before a long simmer/soak in sugar syrup. I skipped the boiling step, thinking that I was following Fany Gerson’s recipe for candied fruits in (the totally amazing) My Sweet Mexico, only to find, upon looking again, that she calls for an overnight soaking in water dosed with calcium oxide. They all used a different ratio of water to sugar, too. Probably, you should follow one of those recipes instead. But here’s what I did:

Slice the Buddha’s Hand citron, peel and all, into long strips, as though for orangettes. Don’t worry if the pieces are different sizes or if some are all white pith. Stare at the pile you’ve made and decide how much simple syrup you’ll need to generously accommodate all the strips, remembering that it will boil down considerably. I made a ridiculous twelve cups for approximately two cups of strips. Six is probably more than enough. (You can always make more.) So. Put three cups of sugar and three cups of water in a large pot and boil until the sugar is completely dissolved and the liquid is clear.

Turn heat down to low simmer and add citron strips. Simmer gently until the strips begin to look translucent, about an hour or two. Revel in the warm scent of preserved citron as it fills your entire house. Turn heat off and let soak overnight sitting on the stove top. In the morning, or whenever you have time (they can soak for days without harm) turn the burner back on and bring to a simmer for another hour, or whenever you remember to check it. Hold up a strip to the light and admire how it sparkles like stained glass.

Reserving the syrup, set strips to dry on a cookie rack set over a tray lined in parchment or waxed paper for twenty-four hours or as long as it takes. Austin is very humid, so I found it helpful to put them in the oven with the light on. Toss with superfine sugar and store in airtight container. Lovely eaten as is or chopped and added to yogurt, morning oatmeal, your favorite muffin recipe etc.

The reserved syrup is delicious, highly fragrant and a gorgeous topaz color. Wonderful as homemade soda in sparkling water, as an ingredient in cocktails, marinades and salad dressings and completely amazing as a sweetener for good black tea.