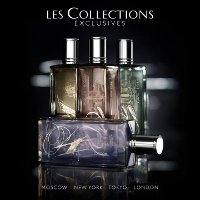 Guerlain has launched London, a new addition to their Une Ville, Un Parfum series. London joins Moscow, Tokyo and New York, which launched in 2009, but since we did not announce them then I've included descriptions below. The range is part of Guerlain's "Exclusive Fragrances" collection, so is in limited distribution.

London ~ "With its fruity, woody and green floral notes, London transports us to the heart of an ultra-trendy capital that is both eccentric and classic. A rhubarb accord, tangy and vegetal, instantly teases the nose, along with the grapefruit and the bergamot. At the heart of ""London"", a duo of roses – the essence and the absolute – is strewn with cardamom and violets, which are interpreted here in a candied version. The light woody base adds a breeze of fantasy, very British, of course." Additional notes include vetiver and cedar.

Moscow ~ "With its musk, fruit and wood notes, the ultra-feminine Moscow perfume echoes the heartbeat that pounds through the Russian capital. You are intoxicated by the heady fragrance of white musk and tonka bean. A carnal, sensual and elegant trace of vanilla and bergamot stays with you. A sudden aroma of red currants delights your senses. Electrified, you take in the hint of absinthe, a sparkling lemon, a note of plum. In the distance, you glimpse a verdant forest of pine needles. You can still hear the heart of Moscow beating." Additional notes include sandalwood.

Tokyo ~ "Green and floral, fresh and delicate,Tokyo evokes all the subtlety of the Japanese capital. Wilful, yet subtle. Ultra-modern, yet bound to its traditions.The sun is still low in the sky; it is the perfect time to awaken your senses in Hibiya Park, a rare green space designed with a Western aesthetic. As you stroll along a pond, the morning dew gives off a fragrance of jasmine and violet, intertwined with Hinoki cypress.You stop in a teahouse. In this world apart where green tea and jasmine scent the air, you allow yourself be transported by the legendary, almost magical tea-drinking tradition." Additional notes include vanilla.

New York  ~ "A woody oriental fragrance, sparkling and sweet, New York excites the taste buds by transporting the senses to the heart of Manhattan on Christmas Eve. From the elegant Uptown to bohemian Downtown, children are dreaming of their Christmas pudding. Smells of vanilla and cinnamon float out of kitchen windows. Already, the air is thick with a scent of cedar, cardamom and bergamot."

(via guerlain, hat tip to Donna)