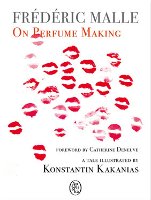 Frédéric Malle's On Perfume Making will be published in Spring 2012:

Frédéric Malle was born in 1962 into the world of perfume. His grandfather was Serge Heftler, founder of Dior Parfums. In 2000 he started his own label, the Editions de Parfums Frédéric Malle. He describes his role as that of a publisher. When developing a fragrance, he invites the best contemporary perfumers and gives them the greatest possible freedom, an unlimited selection of ingredients and as much time as needed to compose a scent without compromise. So far Pierre Bourdon, Jean-Claude Ellena, Edouard Fléchier, Olivia Giacobetti, Dominique Ropion, Maurice Roucel, Edmond Roudnitska, Michel Roudnitska and Ralf Schwieger have accepted his invitation. This book tells the sensitive and wonderful tale of these collaborations and describes the complexities of creating a fragrance.

On Perfume Making by Frédéric Malle will be available in English, French, and German editions (€98/$150). It is 112 pages long and includes a foreword by Catherine Deneuve.