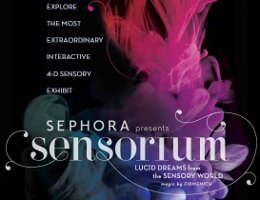 I'll be honest. I didn't expect much from Sensorium. The promotional materials announced that the exhibit was "presented by" Sephora with "magic by" flavor and fragrance company Firmenich. That info, and the tagline "lucid dreams from the sensory world" suggested a barrage of the usual perfume PR nonsense. When I arrived at the small storefront in Manhattan's Meatpacking District, I nearly balked at paying the $15 entrance fee, but what I saw inside was a fascinating range of efforts to inspire and educate potential consumers and an excellent snapshot of the mainstream perfume industry's challenges and internal divisions.1

The exhibit was divided into six small galleries. The first was a long narrow hallway. One wall featured a well-researched timeline of perfume history highlights. On the other wall was an interesting mix of tradition and technology. Raw materials like vetiver and pink pepper were on hand to see and smell, but there was also a video about the use of molecular compounds ("How do we use molecules to make a fragrance?" asks a husky-voiced female narrator. "It's like a dance.") and vitrines featuring fake and real diamond necklaces ("Can you tell the difference?") and fake and real sugar ("Which do you prefer?") intended to help viewers ponder the nature of synthetics. The two definitions of "perfumer" on display didn't shy away from science: 1) "A modern-day wizard who conjures emotions with molecules," 2) "A hybrid bio-chemist and fine artist trained in the esoteric knowledge of crafting a perfume."

In the second gallery I donned headphones in a dark, padded room (they call it a "sensory deprivation booth") and listened to anosmics talk about how losing their sense of smell has diminished their lives. Freshly aware of the importance of smell, I entered a darkened third gallery featuring perfumers' first scent memories (for example, bacon in the morning) delivered through puffs of air from gorgeous glass sculptures while related video images played on the wall. The fourth gallery, also darkened, offered a chance to sample fragrances on the skin as they dripped from dispensers labeled not by traditional notes, the wall text informed me, but by mood. The fifth gallery, still dark, held a series of floor-to-ceiling video screens. Walking along footsteps drawn on the floor caused a series of hallucinogenic images to appear on the screen — the "lucid dreams" — while an abstract "flower" in front of the screen emitted puffs of scent.

I emerged back into the light of day at the Fragrance Bar — exactly what it sounds like, a row of stools bellied up to a plexiglass bar with a truly spectacular display of factices lined up where bottles of alcohol would normally be. Trays full of unlabeled "flights" of upside-down glasses holding perfume-soaked cloth were on offer. Each tray was coded by color and some of the same "mood" vocabulary offered back in gallery four: playful, polished, casual, addictive. A pamphlet offered other descriptive language including "tonality" (fresh, refined, petally, warm) and "composition," a mix of notes (raspberry, lychee) and words (dewy, modern) familiar from the kind of baffling press releases we see regularly here on Now Smell This. The pamphlet invited me to take notes on each perfume I sniffed, using the prompt, "This makes me feel..."  Attendants behind the bar provided the names of the perfumes on request. My date for the day, the lovely beauty blogger, Joey, inquired after several and all were mainstream commercial perfumes (presumably from Firmenich, though I'm not certain).

I had mixed reactions to the displays. I admired the effort to tackle the natural/synthetic question, but questioned some of the tactics. The poignancy of the anosmic testimony was diminished by the loud male robot-god voice that gave us instructions at the end of the looped tape. I liked the idea of a perfumer's first scent memory, but the puffs of scent emitted were of varying quality and some were difficult to smell at all. Since nothing was provided to remove the scent from my skin in gallery four, I ended up dripping it onto paper from my notebook, and I wondered how I would have smelled anything at all in the "lucid dreams" gallery (which I found a little hokey) if I hadn't. I loved the way the Fragrance Bar encouraged people to analyze smells and record their reactions. But I wanted to quarrel with the descriptive vocabulary on offer, especially the "mood" labels: I don't like being told how a scent should affect me and I didn't agree with the categories. (Apparently when I'm "playful" I should smell like a patisserie.)

Ultimately, though I was impressed by the effort and creativity on display, I couldn't stop thinking about the way the exhibit captured a perfume industry struggling to present a more truthful portrait of what it does while trying to hold on to the manipulative (if not always successfully so) blend of memory, emotion and fantasy that has been its bread and butter for so many years. And I had to wonder what an ideal Sensorium would look like, unconstrained by the need to sell anything. An exhibit say, designed by perfume fans to convert their most skeptical friends and family. What say you?

Note: You Tube has a series of Sensorium videos made by the designers who did the installation. I recommend starting with this one.