Clinique celebrates the 40th anniversary of Aromatics Elixir, the 1971 classic chypre developed by perfumer Bernard Chant, with new limited editions including a new interpretation of the fragrance.

Aromatics Elixir Perfume Spray ~ the original fragrance in a collector bottle, in 100 ml. (above left, $55).

AROMATICS ELIXIR is one of perfumery’s most dazzling compositions. It is referred to as a masterpiece because of the beauty of its formulation, the sumptuousness of its ingredients and its unforgettable sillage. I wanted Aromatics Elixir Perfumer’s Reserve to attest to the genius of the original, while yielding a fresh perspective. I hope that in Aromatics Elixir Perfumer’s Reserve, the woman who is addicted to the original will find a new way of experiencing her beloved Aromatics Elixir, while women who thought the original too potent will find this modern homage alluring. It is a scent for an extremely feminine woman who knows what she wants and goes after it with beguilingly subtle wiles; the legend of one generation passed on to – and reinterpreted by - the next.

Aromatics Elixir Solid Perfume Necklace ~ the Perfumer's Reserve fragrance in "an elegant amber locket - emblazoned with the flower symbol - to be worn as a pendant, or secreted into an evening bag." In 1.4g. (not shown, £50).

The first two items can be found now at Macy's. 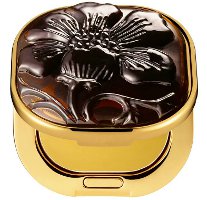