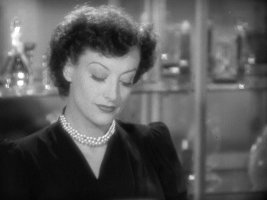 Recently I saw The Silence of the Lambs again. When I first saw the film, just after it came out, my fragrance wardrobe consisted of Chanel Coco and Victoria’s Secret Tranquil Breezes bubble bath. This time, more attuned to perfume references, I chilled as Hannibal Lector met Clarice Starling for the first time. Lector stood straight-backed, arms at his side, and stared at Clarice on the other side of the bars. His nostrils flared and he half-shut his eyes. “You wear L’Air du Temps,” he said. “But not today.” Brilliant.

When I watch movies these days, my eyes are often fixed on the background as I look for perfume. In Guess Who’s Coming for Dinner, two 16-ounce, houndstooth Christian Dior bottles sit on a shelf in the bathroom. I think one of them is Miss Dior. In Auntie Mame, the Rosalind Russell version, Mame gives her housekeeper a giant clock-shaped bottle of something Guerlain I suspect is Shalimar. Another mammoth bottle of Guerlain, this one looking to hold nearly a gallon of Mitsouko Eau de Cologne, adorns the background of an Italian movie. I can’t remember the plot at all, only the Mitsouko.

Then, of course, are movies where perfume nearly plays a supporting role. In The Women (the 1939 version with Joan Crawford — the less said about the Meg Ryan version the better), Joan’s character is a perfume saleswoman. The background of the perfume counter scene is a visual feast. Pause the DVD and luxuriate for a moment as you identify the different fragrances. In American in Paris, Leslie Caron works in a perfume shop. In Will Success Spoil Rock Hunter? Lanvin Arpège should be given film credits for the bowling-ball-sized bottles rimming Jayne Mansfield’s bathtub. In the movie Perfume, scent really is the star, even if the fragrances aren’t any we see on department store shelves today.

Someday I’d like to talk to a Hollywood prop master tasked with choosing perfume for movies. How did someone decide Katherine Hepburn would wear Christian Dior Miss Dior in Guess Who’s Coming to Dinner? Why Arpège and not, say, Piguet Fracas for Jayne Mansfield? And why the heck Shalimar for Auntie Mame’s housekeeper, a White Shoulders gal if I ever saw one? I guess I’ll never know, but it keeps me scanning the tops of dressers in every movie I see.

Do you notice perfume in movies? What bottles have you seen?