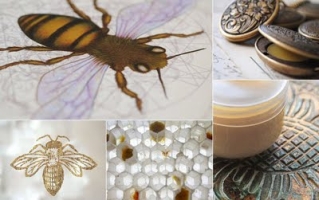 Summer is my favorite time to wear natural perfumes. This is the season when everything is in bloom, so it feels especially appropriate to wear botanical essences; also, the warm weather and warmer skin seem to make the perfumes themselves "flower." In any case, I've spent the past week rotating between several fragrances from indie line Roxana Illuminated Perfume, and the two I'm going to review here are Aurora, an early Illuminated Perfume (first offered in 2006) that keeps drawing me back, and To Bee, the latest release.

Aurora is a floriental with a mood of "vivid light polarized and magnetized." Its notes include mandarin, jasmine, rose, spice, and amber; like all Illuminated Perfume creations, it is formulated with "plant essential oils, absolutes, and CO2 extracts with tinctured plant material in a base of pure organic grape and grain alcohol." Aurora's opening is a nicely blended citrus-spice accord with a touch of clove, followed by some lush ylang ylang (as well as the jasmine). The base is a woodsy-spice blend with a slightly powdery feel and perhaps just a hint of tonka or vanilla.  As promised by Illuminated Perfume, Aurora does give off a carnation-like effect by its dry down.

To my nose, the liquid perfume of Aurora lingers longer in its spicy phase, whereas the solid version moves more quickly into the creamy ylang ylang note. Ideally, I'd apply the liquid in the morning, and then touch up with the solid as the day goes on. (I've purchased one of Illuminated Perfume's brass-finish solid compacts, which is a convenient small pleasure to carry and use.) Despite its spice and amber notes, Aurora is never overwhelming, and it has a classic feeling that I enjoy. It's feminine, but not — dreaded term — "girly."

To Bee is "an opulent ode to the winged alchemist," with notes of honey, spice, amber, mimosa, sweet clover, beeswax, and resins. It was inspired by the smell of actual beehives, and while I've never been near an active hive, I'd like to imagine that they do give off an aroma something like this. On my skin, To Bee's opening is a wave of spice, particularly a rich saffron and a hint of something cinnamon-like. The spices subside after a bit, making space for an accord suggesting sun-warmed grass and a heart note of true beeswax that reminds me of hand-dipped beeswax candles. In the later notes, there's a suggestion of smoky leather (labdanum?) lurking underneath the grass and beeswax. The fragrance's base is a warm amber accord of tonka bean, resin, wood, and vanilla, which Illuminated Perfume has previously offered on its own as a solid perfume called Aumbre.

To Bee develops smoothly and slowly on my skin, and it lasts very well  for a natural perfume. It should interest honey-fragrance fans, although it's not solely a honey scent. It's deeper and more complex than L'Occitane's soothing-sweet Honey Gentle Water (now discontinued) and more nuanced and earthy than the gourmand honey of Wiggle Perfume's Bee. And, since it has spice and resin notes in addition to the honey and wax, it should appeal to other scent-audiences as well. It also feels somewhat more androgynous than the womanly Aurora. Both scents could easily be worn year-round, even if they do seem especially evocative and redolent in the summer air.

Roxana Illuminated Perfume Aurora is available as liquid perfume (7 grams for $150) and solid perfume (5 g for $28); To Bee is also offered in liquid (7 g for $175) and solid (5 g for $28) formulations. Solid perfume compacts and lockets with refills are also available, as are small samples of both scents. For buying information, see the listing for Roxana Illuminated Perfume under Perfume Houses.