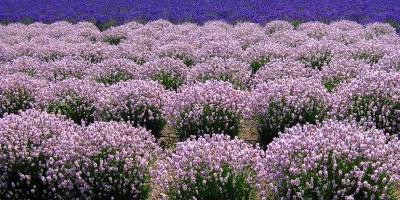 My tired nose is on a brief hiatus from perfume-sniffing. Right now, I’m devoting my appreciation of scent to what’s blooming in the garden: mock-orange/Philadelphus (one of those glorious floral aromas that no perfume can duplicate), honey locust trees, roses, wallflowers, gardenia, jasmine, clove-y “pinks,” peonies…and lavender.

West of Seattle, a large area of land near the town of Sequim, Washington, is devoted to lavender production, and I’m heading there next weekend to breathe in lavender's pungent, herbal aromas. Lavender…in soggy western Washington, you ask? Sequim is located in what residents of Seattle fondly, yearningly call “the rain shadow” of the Olympic Mountains in the Sequim-DungenessValley. Rainfall is usually less than 20 inches a year in the sunny rain shadow, so lavender thrives. As Seattle is the “Paris of the Northwest,” so Sequim is the Provence of  the U.S. (Relax! You may laugh!) 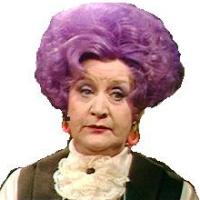 I lived in Seattle well over a decade before venturing to the Sequim Lavender Festival. When I read or heard the words “lavender festival,” images of dotty grandmothers (think Northwest versions of Mrs. Slocombe from Are You Being Served?) with big hats and big hair came to mind, older ladies who were more interested in buying lavender sachets, wreathes, and lavender water by the gallon than enjoying the open fields and landscape of Sequim. (Yes, snobbish of me, but I DO enjoy a truly dotty grandma when I meet one.) After going to Sequim in person last year, I realized the festival is full of people from around the U.S. and abroad: every age, sex, sexual persuasion, ethnicity and political affiliation was represented. There was even a tough-looking motorcycle “gang” in attendance, adorned with bushy moustaches and tattoos galore (none of a lavender sprig, as far as I could tell). I was just as likely to meet Indian women in gorgeous saris in the lavender fields as Seattle earth-mothers in North Face® jackets and Birkenstocks, or homespun grannies in flowered shifts and white tennis shoes.

My favorite moment at the festival last year was finding myself, almost alone, in a lavender field, as a man, sitting on a stool beside a clump of bright-red opium poppies, played his fiddle. The tune was Dvorak-esque — quiet, meandering, folksy, emotional. To hear beautiful music from a single instrument in a field full of flowers was a magical experience. 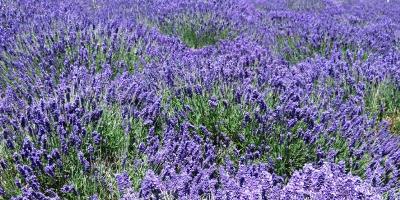 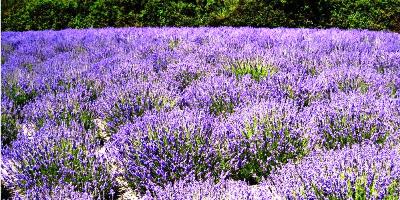 At 2010′s festival, in addition to smelling many varieties of lavender as I walked through the gorgeous fields, there was lots to eat, drink and buy (every type of lavender product imaginable). At the street fair, lavender-accented food and drink was for sale: grilled chicken and lamb with lavender leaves; lavender flavored teas, cocktails, lemonade, spices, honey, jams, jellies, syrups, sauces (lavender-chocolate sauce is delicious, as is lavender BBQ sauce); lavender salad dressing; lavender-honey ice cream; lavender sorbet; lavender brownies;  and lavender-vanilla cheesecake. (Most lavender farms sell lavender plants, too.)

What did I buy?  I became a fan of Purple Haze Lavender soaps (my favorite scents are plain lavender; lavender-patchouli-rosemary; lavender-tangerine; and lavender-lemon). There’s also a useful soap for travelers: the shampoo bar made with lavender and rosemary essential oils. (And I guess I should admit I bought a couple mini-lavender wreathes that looked rather “French Country” when I attached them to the tops of two late-19th century family portraits on the walls of my living room.)

There were lots of interesting animals on the farms — I spotted llamas and, at Sunshine Herb & Lavender Farm, miniature Southdown sheep (used as “weeders”). The Sequim valley is HOT: leave your dogs at home. Dogs are not allowed in the lavender fields and they can’t be left in the car unattended (you will, rightly, be ticketed and your dog rescued — even if it means breaking car windows — if you do so). Since the dog will stay at home, buy him or her something nice, like The Lavender Connection’s lavender-infused pet bed or pet blanket, or one of the many pet toiletries at Moosedreams Lavender Farms (where a portion of the profits from pet products are donated to animal welfare and rescue organizations). I’m going to check out Moosedreams’ calming mist for dogs, with notes of vetiver, lavender and sweet orange (sounds wonderful...even for humans). 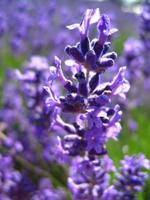 The Sequim Lavender Festival is the largest lavender event in North America; it’s held on July 15, 16 and 17, 2011. This year’s featured lavender farms are: Blackberry Forest; Martha Lane Lavender; Oliver’s Lavender Farm; Nelson’s Duck Pond & Lavender Farm; Lost Mountain Lavender; Peninsula Nurseries and The Lavender Connection. If you prefer a quieter experience and won’t miss the festival’s food, music, and street fair, you can visit Sequim after the festival ends. Sequim lavender fields continue to bloom into September, and most of the lavender farms’ shops are open year-round.

Note: images of lavender by the author (from the 2010 Sequim Lavender Festival); image of Mrs. Slocombe (actress Mollie Sugden) via Wikimedia Commons.