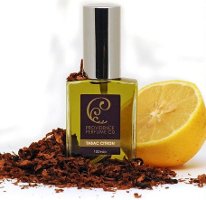 Despite my complaints about boring fragrances in general and boring niche fragrances in particular, I'm generally not all that eager to try new and unknown indie lines. It's true that you might just smell something fabulous, something entirely outside of the proverbial box, something that you can no longer find in mainstream or niche. But to get there, you're going to kiss a lot of frogs, right? And by frogs, I mean fragrances that are not just boring, but awful — scrubbers, perhaps, or worse.1

Providence Perfume Co, which has garnered some attention on the blogs & forums, turned out to be a pleasant surprise. I tried 8 of the line's 9 offerings, and didn't reach for the liquid Tide even once. Charna Ethier is a relative newcomer to the indie natural scene; she's been marketing her own perfumes for about a year or so. Her line caught my eye primarily because she makes a fragrance called Osmanthus Oolong which sounded nearly custom-made for me: black, green and red teas, osmanthus, beeswax. As it turned out, I didn't like Osmanthus Oolong. It was too heavy and sweet, and maybe just too far away from the Osmanthus Oolong of my imagination (I drink real osmanthus oolong tea regularly, and have yet to see it satisfactorily translated into perfume).2 But I did like several others in the line, and so here are brief reviews:

I'll start with Tabac Citron (shown above) because it's so likable. It's a bright cheerful citrus with tobacco and lavender, two notes that I don't always love — I thought it would annoy me so I tested it last, and was immediately charmed. It's an easy-to-wear unisex with just the right amount of bite, and it's perfect for summer. As you'd expect with a natural citrus, this is not a powerhouse of longevity, but the lasting power is reasonable enough (maybe a few hours). A must try for lemon lovers, especially those looking for natural alternatives to standard summer Eau de Cologne.

Indolice is at the other end of the spectrum, perhaps: it's not exactly easy to wear, and it's moody rather than cheerful. The notes are basil, cilantro, jasmine, mushroom and oakmoss. The mushrooms come out fighting in the top notes, but if you hang on, after 15 minutes you've got a lovely deep jasmine, beautifully earthy — and by earthy, I mean it smells like dirt. You know who you are: if that sounds disgusting, you're probably not going to like it; if you like a bit of skank, this one is very worth a shot. I found it dirty but not overly indolic or animalic, but as I've said before, my indole-o-meter is probably off, and I should note that Marina at Perfume Smellin' Things found it "breathtakingly indolic". So consider yourself warned. The lasting power is quite good.

If you love the smell of chocolate but generally dislike sweet gourmands, you might want to give Cocoa Tuberose a shot. It's heavier on the cocoa than the tuberose (other notes include wormwood, pink grapefruit, tonka bean, vetiver, pipe tobacco), and it's dark and smooth with only minimal sweetness. The dry down is woody-earthy and rich, and while it isn't really heavy, it's probably better suited to cool rather than hot weather. I found the lasting power quite good for this one too.

If you've tried any from the line (and especially the one I didn't get to try, Lei Flower), do comment!

1. And what is worse than a scrubber? A scrubber that still makes you shudder with disgust a week later.

2. Trish over at Scent Hive loved Osmanthus Oolong though, and you can read her review here.