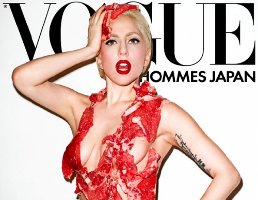 A while back, shortly after the "Lady Gaga's perfume will smell like blood & semen" nonsense was making headlines, one of the blogs at the Dallas Observer did a (rather snarky) list of fun fragrance possibilities for other famous musicians. One of the kinder examples: used flip-flop and a Boca Burger for Phish.

We're going to do our own list. Any celebrity you like, just name what you think their fragrance should smell like. If you want to assign that celebrity a real perfume too, do go right on ahead.

Hat tip to Charlotte for sending the link to the original Dallas Observer article.