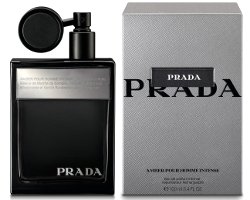 I don't tend to like soapy fragrances, and if you asked me if I'd like a fragrance that smelled like shaving cream, I'd have to say no — but I loved Prada's original Amber Pour Homme (2006), sometimes known as Prada Man, and Prada Man smelled, basically, like shaving cream. It's been on my "to buy" list since it came out, but I've built up an impressive collection of samples and I don't wear it all that frequently anyway. It's not all that likely I'll ever have to buy any.

Prada does a better job than most in terms of telling you what their fragrances will (really) smell like, and so it's worth paying attention to their description of Amber Pour Homme Intense, which called for "a pared back roster of exceptional quality raw ingredients" and "peeling back the layers of leather and barbershop soap present in the original". Yep, this is essentially Amber Pour Homme without the shaving cream — less fougère, more woody oriental. It's heavier on the amber and patchouli. It's darker, spicier, and not quite as smooth. It has a slight cocoa undertone, especially in the early stages, and the vanilla is more noticeable as it dries down, although it's not really any sweeter than the original. Despite the heavier concentration, it doesn't strike me as any louder or stronger, either.

When I reviewed the original Amber Pour Homme, I called it "more soothing than sexy"; Amber Pour Homme Intense tilts in the opposite direction: it isn't as mellow or as conservative. Amber Pour Homme was not what I'd call a feminine scent — it did smell like a man's shaving cream, after all — but it was the sort of masculine scent that was easily borrowed. Amber Pour Homme Intense is more conventionally masculine, and I doubt it will be as widely adopted by women.1 I'd also think it was less suitable for year-round wear (at least, if you live somewhere with hot, humid summers) and I'm surprised Prada didn't release it in the fall instead of the spring.

Verdict: It's well done, and I suspect many men will like it better than the original. This woman will stick with Amber Pour Homme.

1. Actually, I have no idea how widely borrowed Amber Pour Homme is. A sales associate in Nordstrom once told me that she sold as much of it to women as to men, and that it was clear women were buying it for themselves, but it goes without saying that I have no way of knowing who buys or wears it.