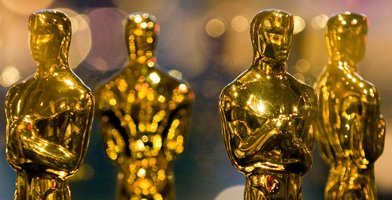 About the author: Diana is the author of the Feminine Things blog. She works in the insurance industry to support her art projects and perfume habit, and at any given time is probably the best smelling person with a law degree in the Pacific Northwest.

Don’t get me wrong. I love television. I love books. I love live theater and concerts and musicals and live dance productions, from Bill T. Jones to the London Ballet Company. I even have affection for the symphony, the opera, and live ice skating.

But there is little I enjoy more than seeing a really good movie. This Sunday, the Academy of Motion Picture Arts and Sciences will come together for the 83rd time to celebrate the movie industry’s best and brightest. And one of my friends, by virtue of a parental connection, gets to go see The Academy Awards live and in person every year. Since I have been watching them from afar all my life, this makes me positively chartreuse with envy.

For my dear friend, though, the thrill wore off a few years ago. So she and her siblings, bored from their oh-so-many star sightings, decided to raise the stakes. They invented a game they call “Brush with Fame.” The goal is to see who, by the end of the night, can come the closest to an honest-to-goodness world-renowned celebrity — possibly even brushing against or bumping into them — without that star noticing. I believe there are bonus points if the famous person in question is also one of the night’s winners. The sibling pack are the arbiters of which star shines the brightest, and the winner gets family bragging rights for the year. Last year my friend, the baby of the group, beat out her siblings by getting close enough to ‘bump’ into Rob Pattinson, the world’s most famous sparkly vampire.

Upon discovering this game, I did what any obsessive film geek would do: I began imagining who I would try to ‘bump’ into. But as a diehard perfumista, I was equally enamored by a concurrent mystery: if I did get that close, close enough to touch them, what would they smell like?

If I were in my friend’s shoes, here’s who I’d be aiming for this Sunday and what I’d hope to smell as I was passing by…

For Best Actor in a Leading Role, I’m hoping for a win for Colin Firth in The King's Speech. However, if James Franco wins for 127 Hours I won’t be surprised. Colin Firth, in my mind, would be wear something respectable and stolid. Something, well, English...and maybe period appropriate. Perhaps Dana English Leather? I’m sure he’d be very polite if I nudged past him on my way through the crowd. And if I ‘accidentally’ tripped and fell into James Franco’s lap, maybe he’d be wearing Serge Lutens Ambre Sultan. (A girl can dream, right?)

As for Best Actress in a Leading Role, Natalie Portman’s turn in Black Swan was mind blowing but I have to say, after seeing Winter’s Bone, I might have to give it to Jennifer Lawrence. I like to imagine our would-be prima ballerina would be wearing CB I Hate Perfume M1 Narcissus as she glided past, and our intrepid, impoverished daughter of the Ozarks would wear Chanel No. 19.

Though I loved Geoffrey Rush in The King's Speech, the Oscar buzz for Christian Bale as Best Actor in a Supporting Role for The Fighter is so strong I suspect he’s going to go home with a shiny statuette. And if I were to, perhaps, spill my drink in Mr. Bale’s general direction, among the I’m-so-sorrys and please-forgive-mes pouring from my mouth, I’d hope to catch a whiff of Hermès Eau d'Hermès.

Speaking of support cast, Best Actress in a Supporting Role had better go to Hailee Steinfeld for her amazing performance in True Grit or I will eat my hat. If we ran into each in the powder room, I‘d tell her as much and I’d hope she’d spray on a little Tauer Perfumes Lonestar Memories as she was on her way back to her seat.

While I was scoping out the rest of the stars in the Hollywood sky, here’s who I’d hope to see win the rest of the ‘big’ categories of the night: Best Animated Film would go to Toy Story 3; Best Directing would go to True Grit and Joel Coen and Ethan Coen; Best Writing for an Adapted Screenplay to The Social Network’s Aaron Sorkin, who is no doubt as neurotic in real life as his characters are on film; and Best Writing for an Original Screenplay to Christopher Nolan for his ten-year-long effort and masterpiece thriller Inception.

Last, but far from least, I’d give Best Picture to The King's Speech. I’ve seen all ten nominees, and though it is difficult to choose just one, that would be my pick.

As for the biggest question: what would I be wearing while I laughed and clapped and sniffed my way through a night among the glitterati, I really can’t say. This would be a near impossible choice and depend heavily on weather, wardrobe, and a hundred other things. For the sake of playing our own little game, though, let’s say something lovely and rare... perhaps L’Artisan Iris Pallida 2007.

Now it’s your turn. If you were out to win “brush with fame” this Sunday, who would you pick, and what would they smell like?