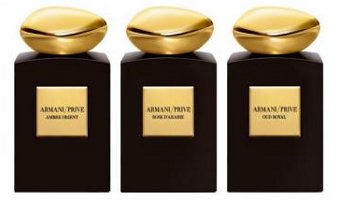 Giorgio Armani has launched a new trio in the Armani Privé range: La Collection des Mille et une Nuits. Ambre Orient, Rose d'Arabie and Oud Royal were all given an exclusive preview last year at individual department stores before their official launch this year. As the collection's name implies, the new fragrances were inspired by the tales from One Thousand and One Nights.

Ambre Orient ~ "From the earliest origins of perfumery, infusions of amber have delivered warm, golden and vibrant light to the greatest fragrances. Just as the sun turns to gold as its mingles and sets over the water, Giorgio Armani has elected to work a liquid amber. Giorgio Armani masters the drape of a lamé blouse; fabrics that ripple and swing to the rhythm of movements. Each fold catches the light, shifting from warm, coppery gold to shades of pale, almost white gold." Featuring notes of thyme, frankincense, patchouli, oud, sandalwood and vanilla.

Rose d'Arabie ~ "Rose d’Arabie is a majestic ode to the essence of rose. Spicy with flashes of saffron at the outset, it chooses patchouli and dark woods in order to develop at the heart. At the base it gives itself up to the sensual harmonies of golden amber."

Oud Royal ~ "When Giorgio Armani turned his attention to oud, he decided to work it the way he would a heavy brocade lined with gold and silver, leaving its weight, its noble intensity and majestic sedateness. Respectful of its personality, Giorgio Armani set about highlighting each facet of character in its composition: depth is amplified by an amber harmony, the reddish glow is fanned with spices, the dark earth reflections are smoked with a veil of myrrh and incense." Additional notes include black earth note, animalic notes.