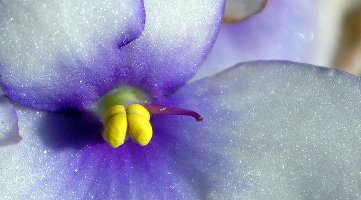 Violette in Love, by Parfums de Nicolaï, came out in 2009. I can't remember when I first tried it, but I think it wasn't until much later, possibly the following year. At any rate, I thought it was pretty but maybe too charming for my taste, and I set it aside.

Now, there was a time when I tried almost everything — everything I didn't absolutely detest, anyway — at least a few times. Many fragrances I tried more than that. I might have worn the same fragrance, off and on, for a few weeks: lived with it awhile, in other words, before deciding what I thought of it.

Those days are long gone. It is not just that there are too many fragrances, practically speaking, to spend that much time on each one. It's also a psychological effect, distantly related, perhaps, to the well-documented studies that show that more choice does not lead to more happiness: when there are so many fragrances, it seems less important (to me, anyway, slacker that I am) if I miss one or two gems. I know I can't find them all, but surely I'll find plenty of other gems.

So Violette in Love got only one shot, maybe two, and then I filed it away. Later, I saw a few mentions of it here and there (Erin called it "just nice" when she reviewed L'Eau Mixte), none of them glowing.

I don't know exactly what made me fish the sample back out of oblivion a few weeks ago, but I was thinking about violets for reason, and lamenting that I no longer have any Borsari Violetta di Parma, and wondering if I should buy that new 20 ml size of Balenciaga Paris (which I have not yet posted about). And Violette in Love came to my mind, and next thing you know I was wearing it, and I was quite taken. It seemed like L'Artisan Drôle de Rose (or its heavier cousin, Parfums de Nicolaï's own Balkis, which appears to be sadly discontinued) in reverse, with the violet front and center and the rose behind. It was still charming, but now it was charming with a sly smile, and the overdose of raspberry lollipop in the opening made me happy instead of making me wrinkle my nose, and I was willing to second the brand's description of "modern and shimmering", and all the rest. I have long since (mostly) given up buying things right off the bat, but all the same I was tempted by the reasonably priced small size (30 ml, shown below, $45).

And so it seemed the next time I wore it. Then, I wore it again, and the raspberry note really seemed too heavy and too fake, and the musk in the base too heavy and too sour, and I could not even find the "just nice" part. I've worn it several times since then, and the results have been mixed. I give up.

So here is the quick poll:

1. Assuming you don't make up your mind right away, how many times do you try something before you give up?

2. Have your testing habits changed as the number of new fragrance releases has risen?

And of course, do comment on Violette in Love if you have tried it. Coming up on Thursday probably next Tuesday: a review of Parfums de Nicolaï Kiss Me Tender.

Parfums de Nicolaï Violette in Love is a limited edition, and the notes include lemon, pink pepper, raspberry, blackcurrant, rose, violet-iris accord, coriander, black pepper and musk. It can be found in 30 and 100 ml Eau de Toilette; for buying information see the listing for Parfums de Nicolaï under Perfume Houses.

Note: image is african violet by ankakay at flickr; some rights reserved.