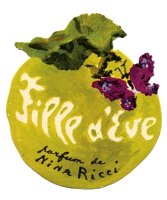 I first smelled Nina Ricci Fille d'Eve on a business trip to Seattle about 10 years ago. Before we left town, a colleague and I stopped by Parfumerie Nasreen and sampled perfumes, none of which I remember at all now. The owner of the shop stopped us as we left. She pulled a small, apple-shaped bottle from a high shelf behind the cash register and asked if I'd like to try it. "This is very special. Fille d'Eve," she said and held the bottle as if she were presenting it at a game show.

Eve's daughter. How could I resist trying a fragrance with a name like that? She dabbed a bit on my wrist, and I asked the price. It was something exorbitant, so I left without giving it more than a cursory sniff. Half an hour out of town I sniffed my wrist again. It smelled not quite clean. Not dirty as in body odor, but like an accumulation of skin oil. Not pretty, really, but intriguing.

Over the years I'd thought about Fille d'Eve and wished I could smell it again. I heard Germaine Cellier created it which only increased my yen to get hold of some. (Since then, I've learned that Michael Edwards' database Fragrances of the World lists perfumers Michel Hy and Jacques Bercia as Fille d'Eve's real authors, but this hardly cools my ardor since Hy and Bercia created another of my favorite chypres, Yves Saint Laurent Y, and Michel Hy is also the nose behind Paco Rabanne Calandre, Balmain Ivoire, and the co-creator of Yves Saint Laurent Rive Gauche.) Finally, a few weeks ago I received a dram of the parfum in a swap. It's love.

Fille d'Eve is a quiet floral chypre with a gentle fruitiness. After the classic bergamot opening, a seamless floral blend takes a backseat to a lot of musky oakmoss, and the star of the show, costus. I hadn't heard of costus until someone referred me to a post about costus on 1000 fragrances. Its odor has been compared to precious wood, hair, wet dog, and by one reviewer on Basenotes as something between "plaster and goat".

To me Fille d'Eve smells like oakmoss crossed with the scent of the scalp of a baby overdue for his bath, underscored with a touch of musk and sweet sandalwood. The "body" smell in Fille d'Eve has none of the dead squirrel smell of civet, or fecal tint of indoles, or sweatiness of some musks and cumin (I hope no one is eating breakfast while they're reading this.) Instead Fille d'Eve smells clean plus two days rather than freshly washed. Instead of smelling sexy, Fille d'Eve smells innocent, but personal. If there was ever a skin chypre, this is it.

Fille d'Eve launched in 1952 and it shows. People who are used to modern fragrances with clearly identifiable fruit and floral notes might not see Fille d'Eve's beauty, just as someone who listens mostly to dance club music might be jarred by a switch to Debussy. The melodies are harder to pick out, and they're not familiar. Still, I think Fille d'Eve is worth the effort of getting to know, and if you're already a fan of chypres this one is almost certain to be a home run for you. 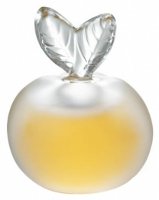 Of course there's a catch. Nina Ricci Fille d'Eve is still in production, but it's hard to get, and it's expensive. Sephora in France carries the 15 ml Extrait de Parfum in the Lalique bottle (shown above) for 344€; Beautyencounter in the US has it for $299.

Why I Love Old School Chypres