“What’s the first thing a person does when you hand them flowers?” Bob Otsuka, general manager of the San Francisco Flower Mart, asked me. To answer his own question, he pantomimed the gesture people make, bringing his hands to his face and breathing deeply.

But fragrance, as we know so well, is expensive. It costs plants a lot of energy to produce, and it shortens the lives of their blooms. Cut flowers, like those sold at the Flower Mart, are “bred for industry” — for color, uniformity, and durability. Along the way, most have lost their scent.

And yet, Otsuka tells Stewart, “People still want to believe that flowers smell good. I’ve seen somebody put their face right into a bunch of ‘Leonides’ and say, ‘Oh, they smell wonderful.’ But I know that rose. It’s got gold petals with coppery edges — you know the one I mean? It was bred for fall weddings. And it doesn’t have any fragrance at all.” (Ibid.)

Stewart goes on to see many floral marvels, but the story of those scentless roses haunts the rest of the book. It’s a small parable on the perils of turning the beauty and romance of flowers into a very big business, and a poignant reminder of the way we instinctively use our sense of smell to connect to the world. Later, Stewart catches herself sniffing at a bouquet even though she knows there is nothing to smell.

I’ve thought of those scentless roses often, and wistfully. So this May, when the large UK-based flower seller Interflora (a division of FTD) announced they would be showing four new fragrant rose bouquets at the Chelsea Flower Show I paid attention. Could this be the start of a new trend?

My research revealed legendary rose breeder/grower David Austin had taken the plunge into the cut flower market with fragrant, old-fashioned roses that can be ordered from Interflora, various high-end florists, or directly from the Austin website, where bouquets start at $80 for a dozen roses.

Then, a few months later, I spotted a cut flower display labeled “Fragrant Roses” at my local high-end grocery store. They looked very different from standard long-stemmed roses. Their stems were on the thinner, shorter side, and they had full, round heads that were more open than the tight buds I usually see. Each bouquet (six for nine dollars, not too bad) was labeled by name, blooming habit, scent and origins. I sniffed through half a dozen and went home with the two most fragrant bouquets I could find, a white rose named “Jeanne Moreau” (and how perfect is that?) and another white called “Vitality.”

Ms. Moreau proved subtle once I got her home, but Vitality filled our entire living room with a bright tea-rose fragrance that was noticeable every time I entered the room. Both roses lasted a full seven days in their vase on the mantle, away from direct sunlight, and opened beautifully into large, loose painterly blooms.

The web address on the bouquet label led me to Alexandra Farms, a grower based in Colombia. Alexandra Farms is a small company. Their charming website introduces each of their employees with a photograph and bio, and when I wrote to the person in charge of sales, I got my answer directly from the president of the company, Jose Azout, who was also kind enough to answer my follow up questions.

Azout told me that Alexandra Farms was started by a group of industry veterans who “got a bit bored with the industrial looking, bred for shelf life roses we were growing. We wanted to go back to the romance roses used to represent in Victorian England and early 18th century Holland and the Dutch masters' paintings.”

Boredom and romance? Really? What about market analysis? Azout pointed to the popularity of vintage clothes and old music, the feeling that “things just aren’t made like they used to be,” but the heart of the matter was that roses have been done in by the very qualities that made their mass production possible. Once the same standardized, scentless roses started showing up in cheap, stiff bunches at every grocery store, Walmart and Costco, roses no longer seemed special. At the same time, customers had developed more sophisticated tastes. Industry veterans weren’t the only ones who were bored and longing for romance. 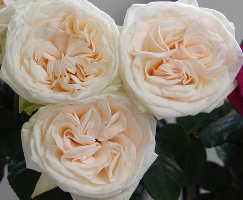 And there is something romantic about the way Alexandra Farms combed through hundreds of old and abandoned varieties from breeders, looking for that magic combination of scent, looks, and vase life. Once they had successfully grown and sold a few varieties, breeders began coming to them with their fragrant and “old-fashioned” looking roses. Each year, Alexandra Farms tests over one hundred varieties and selects around five. The rose pictured just above is a new, not-yet-available favorite of Azout’s, the White O’Hara. (Check out that quartered center.) He described its scent as “floral, with a bit of myrrh.”1

Like David Austin Roses, Alexandra Farms sells mostly to high-end florists. My grocery store is one of only two in the U.S. to carry their flowers. Any plans to expand on the mass market front? (I asked, fingers crossed.) Azout gave me a qualified yes — they’re looking carefully at “very high end grocery stores that target very discriminating consumers.” Perhaps they are afraid too much availability would mean their roses, too, would no longer be special.

I wonder. The florist at my grocery store told me they’ve sold out every lot of Alexandra Farms roses they’ve ordered, and that the most fragrant varieties are always the first to go.

I asked Azout if he noticed a difference in the way people respond to fragrant roses. Like Otsuka, he noted that every time someone picks up a flower they smell it. He has seen many people bend to sniff flowers that have no scent: “you can see the let down in their eyes.” But with a fragrant rose, “their eyes sparkle, or they close their eyes and smile.”

1. Reading through the descriptions of rose scents on various websites, I noticed that notes frequently paired with roses in perfume (myrrh, spices, citrus, violets, berries and other fruit) often show up in the blooms themselves. If you grow roses, please do comment on this.

Note: all images are courtesy of Alexandra Farms. The roses at the top, shown left to right, are: Marietheresia, Augusta Luise and Romantic Antike.