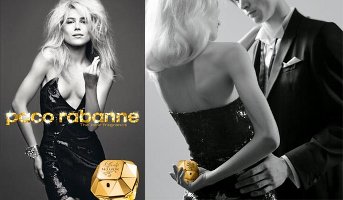 Lady Million is Paco Rabanne's newish feminine counterpart to 1 Million, a fragrance that I liked even less than Kevin did — in fact, the only thing I liked about 1 Million was the fun commercial.

The commercial for Lady Million was a little less fun — it was so much like the 1 Million commercial that it seemed like an afterthought — but I like the fragrance a little better. The start is rocky: mega-sweet neon fruit punch over a darkish base, and for a moment or two I thought we were going down the same candied road as Black XS, or any number of the loud fruitcholi perfumes of the past couple years. But it dries down reasonably quickly into your basic ambery-musky woods, lightly honeyed, with some floral notes that might reasonably be imagined to stand in for the orange blossom, jasmine and gardenia listed in the ad copy. It's still a bit louder than I would like in the middle stages, but within an hour or so it's calm enough to be quite wearable if not particularly enjoyable. It's not bad, mind you, but it hasn't got anything really going for it either: it smells too much like a gazillionty other things on the market. By next Monday, I will have already forgotten what it smells like.

As is so often the case, the reviews at Sephora are drastically different than mine: sexy and sophisticated seems to be the consensus. The folks on the fragrance board at MakeupAlley mostly call it generic.