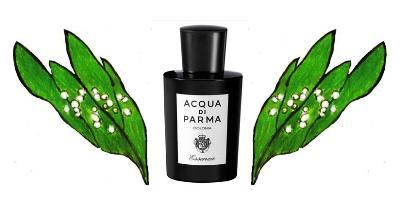 The lead-in to Colonia Essenza’s base comes in the form of a bitter herbal note, not immediately recognizable as “rosemary.” This rough note arrives just in time to prevent Colonia Essenza’s mid-stage flowers from becoming too dainty and ladylike. (Note: when smelled on a paper strip, Colonia Essenza will fool you into thinking it is a smooth, creamy floral scent with a hint of powdery musk. On a card, the herbal/bitter note is not discernable, and if you don’t like herbal/bitter notes that’s good to know!)

Throughout its development, Colonia Essenza never completely loses its floral character, but it goes from a sunny and warm green-citrus-floral composition into shady-and-cool scent territory. As the cologne enters its final phase, I get the feeling clouds, and a cold front, have moved through Colonia Essenza’s “garden,” chilling the flowers and fruit...and blunting their aromas. I love Colonia Essenza’s diminuendo: the muted base notes of “shadowy” rose and lily of the valley, chalky wood, desiccated patchouli, dusty musk, and stark, cool amber.

Colonia Essenza is, overall, a conservative fragrance; but it’s more dashing, less prim, than its progenitor, Colonia. Though Colonia Essenza’s base notes are soft and a bit talc-y, they don’t possess original Colonia’s “soapy”/“fresh laundry” vibe. Colonia Essenza has good lasting power and "proper" sillage — it doesn't dominate a room.

Note: top image of lily of the valley [altered] via Wikimedia Commons.